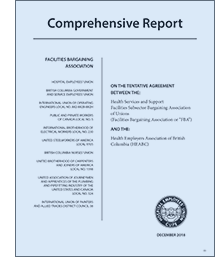 On December 1, a tentative agreement covering 44,000 health care workers was reached between the multi-union Facilities Bargaining Association (FBA) and the Health Employers Association of BC (HEABC).

The agreement includes new language and resources to tackle the high injury rates experienced by FBA members, and it provides workers with more job security protections in the face of health care restructuring – including a restoration of pre-2002 contracting-out protections.

The HEU Provincial Executive has reviewed the agreement and is recommending that members vote “yes” in ratification votes that are being scheduled for later in January.

We will be posting the voting schedule as soon as possible, so please check back to find out when your local votes, or sign up for HEU news and updates.

(Note: this document is more than 65 pages long.)

Tentative Agreement at a glance 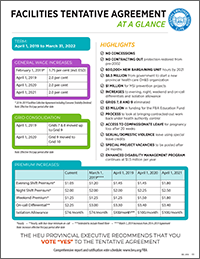 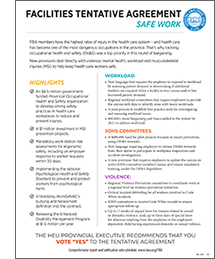 FBA members have the highest rates of injury in the health care system – and health care has become one of the most dangerous occupations in the province. That’s why tackling occupational health and safety (OH&S) was a top priority in this round of bargaining. 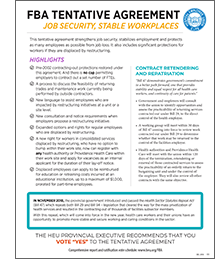 This tentative agreement strengthens job security, stabilizes employment and protects as many employees as possible from job loss. It also includes significant protections for workers if they are displaced by restructuring. 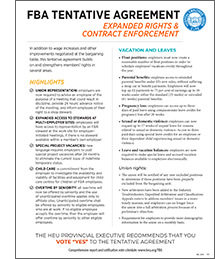 In addition to wage increases and other improvements negotiated at the bargaining table, this tentative agreement builds on and strengthens members’ rights in several areas.

» Sign up for HEU news and updates by email »