From June 5-7, HEU’s bargaining committee representing Aramark members went back to the table to negotiate a new contract. 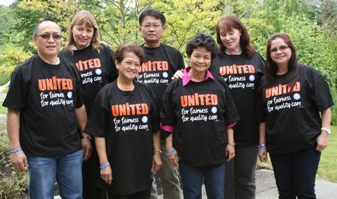 Over the three days of negotiations, your committee was able to make progress on many key demands for improved benefits, safer workplaces and a more respectful employment environment. The only demands that still remain to be resolved are wages and benefits.

There was agreement on increasing the number of uniforms, providing lockers, instituting overtime pay on time for breaks that need to be rescheduled, and boosting the travel allowance.

There will also be extra training regarding infection and harmful materials, and new work alone and ergonomic provisions. New language promoting a respectful worksite that formally prohibits verbal, visual or physical harassment was also negotiated.

Aramark finally tabled a monetary package in response to HEU’s January proposal. However, their offer fails to satisfy wages and benefit demands as identified by HEU members at our June 2012 Big Five bargaining conference.

Bargaining with Aramark is set to resume July 16-18.

The HEU bargaining committee will be meeting with members starting on June 17 to provide a progress report on bargaining.

Meetings will be held at sites across the Lower Mainland from Vancouver to Hope. For meeting time, date and location details, click here.

MAY 28 RALLY BRINGS OUT HUNDREDS

On May 28, over 300 Aramark, Sodexo and other contracted support services members of HEU rallied in Vancouver for a fair deal.

HEU members from Vancouver General Hospital and allies from several other unions also joined in to show their support.