Bargaining with Sodexo continues at a slow pace 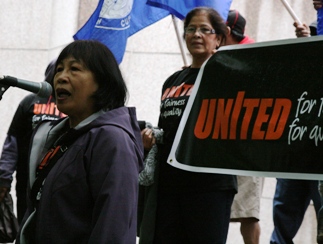 From June 10-12, HEU’s bargaining committee representing 1,500-plus Sodexo members went back to the table to negotiate a new contract.

There were some good discussions on training for new employees and on casual availability but no agreement was reached.

Sodexo wants casual and part-time employees to make a three-month scheduling commitment for potential shifts, and other strict requirements.

As part of the bargaining report meetings that commence on June 17, casual and regular part-time members will be asked to complete a survey on this topic to help us respond to Sodexo’s demands.

Sodexo also tabled a wage proposal in response to HEU’s January proposals. And while more work is needed to resolve monetary issues between our members and the employer, Sodexo has agreed to review benefits at the next bargaining session.

The HEU bargaining committee will be meeting with members starting on June 17 to provide a progress report on bargaining.

Meetings will be held at sites across the Lower Mainland from Vancouver to Hope. For meeting times, date and location details, click here.

On May 28, over 300 Aramark, Sodexo and other contracted support services members of HEU rallied in Vancouver for a fair deal.

HEU members from Vancouver General Hospital and allies from several other unions also joined in to show their support.