Compass and Marquise members bargain and rally on the Island

Throughout the last week of May, Compass and Marquise members gathered on Vancouver Island to push for a new contract – both at the bargaining table and on the streets. 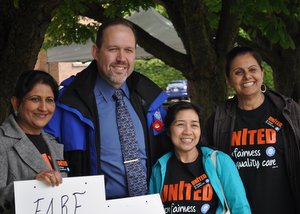 Face-to-face meetings between the Compass and Marquise joint bargaining committee and employers took place in Victoria from May 28-30. Over the three days of negotiations, your committee explored all bargaining demands in detail, including sick leave and wage proposals.

The committee also discussed proposals dealing with improving respect for members in the workplace, health and safety issues and the merger of seniority rights between Compass’ Crothal and Morrison members.

While the bargaining team experienced good productive discussions on most issues, there were no significant moves to address members’ priority issues.

On May 29, during a scheduled break in negotiations, nearly 200 HEU members from Marquise and Compass, along with supporters from other unions, gathered for a late afternoon rally in front of Royal Jubilee Hospital. Speakers included Compass and Marquise bargaining committee member Ryan Mann, HEU secretary business manager Bonnie Pearson and HEU president Victor Elkins.