A fair and reasonable wage increase along with improved vacation benefits were two priorities that members identified for this round of bargaining. Compass-Marquise’s latest offer fails to deliver on both.

And like the bargaining committees for your brothers and sisters at Aramark and Sodexo, your negotiating committee is now seeking a strike mandate from members.

Here are three examples of why we are taking this step. 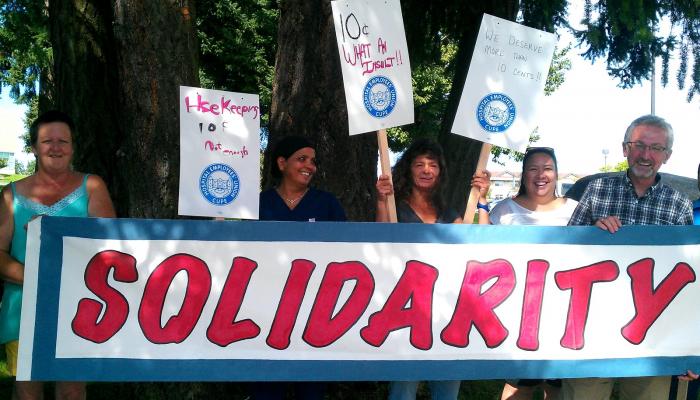 On wages, Compass-Marquise have offered a three-year deal that amounts to less than one per cent for most members each year.

Your committee also asked for improvements to vacation time. The employer has refused to consider our proposal. Finally, the employer wants to hike your meal plan fee by 14 per cent – boosting your daily meal cost from $1.75 to $2.00. This would effectively consume nearly a third of the first pay increase the companies have offered.

We need a strong strike mandate, if we are to go back to the bargaining table to get the best deal we can from Compass-Marquise.

Voting for Compass-Marquise members on Vancouver Island, in the Lower Mainland and Fraser Valley will take place from Sept. 18-Oct. 3. The voting schedule is now available here on our web site.

Why do we need a strike vote?

Taking a strike vote is about showing your collective support as union members for your bargaining demands in your fight for a fair contract.

Like other actions we have taken since bargaining began a year ago, it’s an important step we need to take as a union during negotiations.

Getting a strong strike mandate means the employer knows we are serious about taking job action to back our demands.