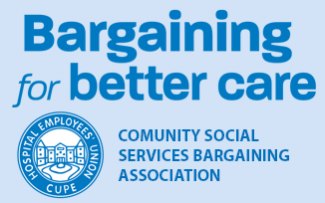 As previously reported, the Community Social Services unions were invited by the provincial government to the table for early contract discussions.

The parties have concluded a protocol agreement and have begun exchanging proposals across the table and engaging in discussions.

The CSSBA is committed to bargain the mandate put forward by their membership.

More than 15,000 CSS workers are covered by the talks. HEU represents approximately 1,500 workers in the bargaining association, and is the third largest union for social services workers in B.C. after BCGEU and CUPE.

If you would like to receive HEU CSS bargaining updates directly, please send your name, worksite and contact info to members@heu.org or text 604-785-5324.