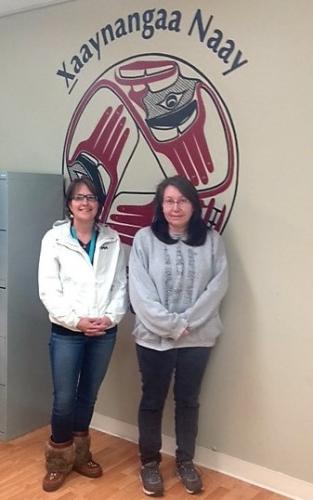 On May 18, health care workers employed by the Skidegate Band Council, and represented by the Hospital Employees’ Union, voted in favour of ratifying a renewed three-year contract.

The contract, which covers about two dozen employees at the Skidegate Health Centre in Haida Gwaii, provides a number of improvements to wages and working conditions.

A tentative deal was reached on May 6 after only two days of negotiations with the employer.

The HEU bargaining team presented proposals that were prioritized at the union’s First Nations Bargaining Conference earlier this spring, and adapted to meet the specific needs of Skidegate workers.

This included incorporating the guiding principles of Haida teaching and Haida Laws.

“Our collective agreement is now more reflective of our Haida culture,” says committee member Nadine Jones. “It was encouraging to have bargaining done in a respectful manner and to be heard.”

“We heard the concerns of the members and were able to address them in bargaining,” adds committee member Crystal Zeller. “The tone in bargaining was greatly improved over the last round.”

Other highlights include: improvements to contract language around paid leave, increased stat pay percentage for part-time staff, training more shop stewards, a new allowance for uniforms, and a five per cent wage increase over the life of the collective agreement.