In preparations for negotiations, HEU members representing contracted support services workers from the Lower Mainland and Vancouver Island gathered from September 11 to 14 to endorse bargaining priorities. 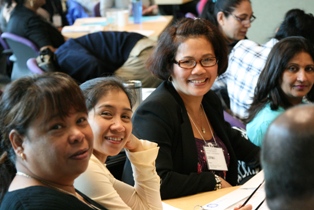 The dates for negotiations with employers are as follows:

For Compass and Marquise, no dates are yet confirmed.

Your worksite BT member or CAT member will be circulating a petition in support of HEU’s bargaining proposals.

Would you like to become a member of our contract action teams (CAT)?

CAT members help keep other co-workers informed and involved throughout contract negotiations. To learn more, please speak with either your bargaining team or servicing representative.

How our campaign works

There are three groups that make up our bargaining campaign, the bargaining team (BT), the contract action team (CAT) and all other contract support services members.

The bargaining team is made up of approximately 40 members who were elected at the June bargaining conference and through votes at single site facilities. BT members are responsible for:

Members of the contract action team are nominated by co-workers and we are working to have one CAT member for every 10 members. CAT members are responsible for:

The 3,750 members who work for Aramark, Acciona, Sodexo, Compass and Marquise at 80 worksites in the Lower Mainland and Vancouver Island are part of HEU’s contract support services worker team. Members are responsible for: