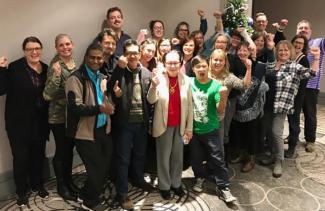 The agreement was reached over the weekend with the Health Employers Association of British Columbia (HEABC). The FBA is comprised of 10 unions, including the Hospital Employees’ Union with more than 90 per cent of the 44,000 health care workers covered by the talks.

HEU secretary-business manager Jennifer Whiteside, chief negotiator for the FBA, says the proposed agreement restores and improves rights for union members including a restoration of no contracting-out provisions that were eliminated 16 years ago.

“We have restored rights that were legislated away and we’ve negotiated new rights that provide stronger protections for workers as our health care system evolves,” says Whiteside.

The agreement also includes initiatives to tackle workload and the alarmingly high rate of injuries that make health care among the province’s most dangerous workplaces.

“It is significant that we were able to convince health employers and government to work with us on system-wide approaches to making our workplaces safer,” says Whiteside.

“This agreement is a major move forward in addressing the health and safety crisis facing our members – and a top priority for our unions in this round of negotiations.”

Full details of the agreement, which include compensation increases in line with the government’s negotiating mandate for public sector employers, will be provided to union members in advance of ratification votes which are yet to be scheduled.

The tentative agreement was reached after a total of nine weeks of talks, which began in early September.

“I want to acknowledge the hard work and dedication of FBA committee members from all unions,” says Whiteside. “In a complex set of negotiations, they ensured that safe and economically secure work remained front and centre.”

In addition to HEU, the FBA includes workers in nine other unions, including the B.C. Government and Service Employees’ Union, and the International Union of Operating Engineers.

Another seven unions represent less than one per cent of workers in the FBA, and are represented at the bargaining table by the Public and Private Workers of Canada Local 5.

HEU’s Provincial Executive is reviewing the details of the tentative agreement this week. More information about the settlement, including a comprehensive report and the ratification vote schedule, will be available to members in the coming weeks.