Back your bargaining demands 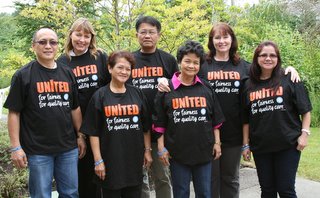 Despite making progress on some items, your committee is not satisfied with the progress of negotiations on monetary issues for your next contract with Aramark.

A fair and reasonable wage increase along with health benefit improvements were two priorities that members identified for this round of bargaining. Aramark’s latest offer fails to deliver on both.

Your bargaining committee is now seeking a strike mandate from members. Here are just a few key examples of why we are taking this next step.

Members told us in last year’s bargaining survey they wanted progress made on benefits in the next contract. Aramark finally agreed to look at a Pharmacare tie-in that would save $270,000 a year. But rather than share the savings to improve wages and benefits, Aramark wants to keep 70 per cent of the savings.

Finally, Aramark told your bargaining committee the reason there is so little for wage and benefit improvements is due to failed cleaning audits, implying our members are at fault. It’s a slap in the face when workers are forced to do their job without appropriate supplies and equipment, poor training and inadequate staffing levels.

We need a strong strike mandate, if we are to go back to the bargaining table to get the best deal we can from Aramark.

Voting for both Sodexo and Aramark members will take place from Sept. 16-27. You may vote one time at any location. The voting schedule is now available here on our web site.

Why do we need a strike vote?

Taking a strike vote is about showing your collective support as union members for your bargaining demands in your fight for a fair contract.

Like other actions we have taken since bargaining began a year ago, it’s an important step we need to take as a union during negotiations.

Getting a strong strike mandate means the employer knows we are serious about taking job action to back our demands.