Late Sunday night, the HEU-Sodexo bargaining committee reached a tentative agreement with Sodexo for a four-year contract that includes a one dollar an hour increase over the lifetime of the contract for all members, plus significant health benefit improvements for members and their families.

As a result, strike vote meetings scheduled for Sodexo members are cancelled immediately, and ratification votes will be scheduled as soon as possible so members can vote on the package. 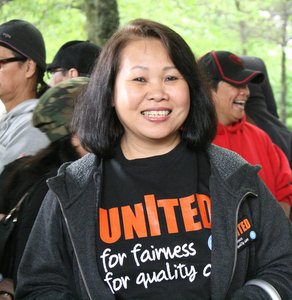 Benefits will also be significantly improved. Effective March 1, 2014, your existing benefits would be replaced with a new package that should meet many of the needs of you and your family.If ratified, Sodexo members will receive a prescription drug card to purchase medication covered by BC PharmaCare and the employer will now cover 100 per cent of the drug benefit. In addition, the $2,000 per year cap on prescription medication will be eliminated.

Vision care, paramedical treatments and other existing benefits would be boosted, plus new coverage would apply to orthotic inserts. Your basic dental coverage would rise from 80 per cent to 90 per cent, and orthodontic coverage will be added to the plan on Sept. 1, 2016.

As for measures to improve respect and dignity on the job, last January Sodexo agreed to a commitment to fair treatment in the workplace, stronger protections against worksite harassment, and a fairer probationary period and evaluation process.

Please note, this tentative agreement does not apply to those working for Sodexo at Abbotsford Regional Hospital and Cancer Centre, as these members are covered by another contract. Bargaining for a new agreement for these members will begin soon.

Strike votes will continue for Aramark and Compass-Marquise members until Oct. 3.

Members to vote on tentative deal

Members will now decide whether or not to accept the proposed contract. Your bargaining committee unanimously recommends acceptance.

A comprehensive report with full details of the agreement is being prepared for members to review, and ratification votes will be scheduled in the near future.

Meeting notices and the voting schedule will be posted on union bulletin boards and online here on the HEU web site.