Despite the assistance of experienced labour relations mediators, negotiations for renewed agreements with both Aramark and Sodexo have broken down as these employers refuse to be fair and reasonable on the remaining key issues of wages and benefits. 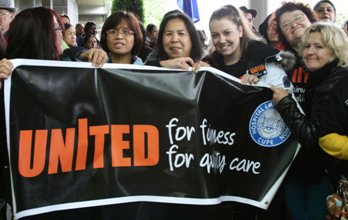 As a result, the union will organize strike votes for September. More details on the strike vote schedules and the bargaining issues at stake will be issued next week.

The union’s Provincial Executive meeting this week in Vancouver gave their approval for the strike votes as required under the union’s constitution and by-laws.

HEU is now focusing on two days of negotiations with Compass-Marquise, and hoping for a breakthrough at that table.

Those talks are scheduled for August 29 and 30 in Victoria.

Acciona members’ contract will be renewed once the Aramark, Compass-Marquise and Sodexo agreements have been settled. That’s because under an arbitrator’s ruling, the next agreement will be an average of the industry standard for wages, health and welfare benefits, and other monetary improvements.

It’s expected that essential services for Sodexo and Aramark will be finalized in September.

Under the Labour Code, the union is required to negotiate minimum staffing levels that will be provided in the event of job action in order to protect the health and safety of patients.

Managers are also required to work on the front line as part of these minimum staffing levels.

Essential service levels must be established and approved by the Labour Relations Board before any job action can take place.