The union’s 31st biennial convention - Powered by solidarity - was held November 4-9, 2018 at the Hyatt Regency Hotel in Vancouver.

HEU’s biennial convention is the supreme policy-making body of the union.

Held every two years, the convention brings together delegates from all locals across the province to collectively determine the union's priorities and course of direction. 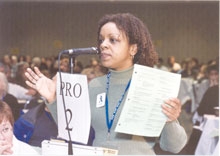 During the convention, delegates discuss and vote on resolutions and any proposed changes to the union’s constitution and by-laws that have been brought forward by their locals.

Additional pre-bargaining conferences focus on occupational groups in the facilities subsector and on members working in the community health and community social services sectors. And as of convention 2010, pre-bargaining conferences are now held for members covered by independent and private subsector contracts, including Aramark, Sodexo and Compass (formerly the "Big 3"), Acciona and Marquise, as well as First Nations.