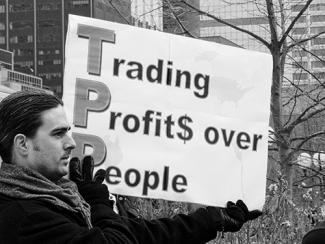 Negotiated behind closed doors over the past five years, most Canadians didn’t learn about the controversial Trans Pacific Partnership (TPP) agreement until the federal election. That’s when former Prime Minister Stephen Harper was suddenly called on to end the secrecy and release the text of the largest trade deal in history.

Supporters argue the TPP will eliminate trade barriers and boost the economy.

But critics say trade deals like the TPP only increase corporate power at the expense of government rights.

And like the North American Free Trade Agreement (NAFTA) before it, the TPP threatens new government policies regulating everything from environmental regulations and health and safety standards to patent and copyright protections and public services.

It sounds twisted. And it is.

These are all policy areas where Canada as a democratic country is vested with the authority to act in the public interest on such critical social issues as climate change, public education and health care, and First Nations’ resources.

But in the eyes of corporations, those are all areas that could impact their ability to make future profits.

Robert Reich, former U.S. Secretary of Labor, says lobbyists from America’s biggest corporations and Wall Street banks have been involved in negotiating the TPP, but not the public. “That’s a recipe for fatter profits and bigger paychecks at the top, but not a good deal for most of us, or even for most of the rest of the world,” he says. 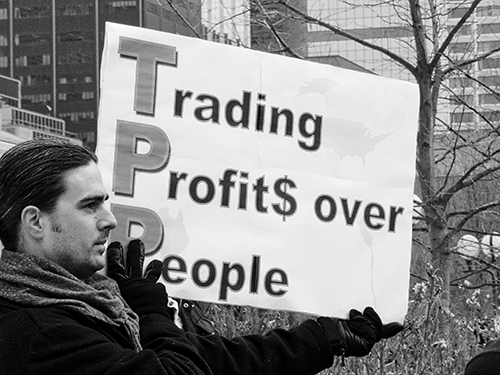 corporate interference happen under trade deals like the TPP?

First, the agreement sets up an investor-state dispute settlement (ISDS) process that allows corporations to sue governments – without recourse – outside of Canada’s legal system.

Essentially, governments can end up paying millions of dollars to corporations if they choose to introduce new regulations in the public interest.

Under NAFTA’s closed-door private courts, Canada has become the most sued country.

And because the TPP includes 12 countries, which make up approximately 40 per cent of the global economy, the threat is all the more damaging. The TPP expands the number of corporations that can litigate.

In fact, the Council of Canadians warns that the ISDS is so harmful that it must be removed from the TPP in order to protect any progress made in Paris at the United Nations Conference on Climate Change.

And trade agreements, like the TPP, can effectively kill a policy initiative out of fear that a major corporation will sue for potential loss of profit.

As far back as 2001, a former government official in Ottawa told the Nation, “I’ve seen the letters from the New York and DC law firms coming up to the Canadian government on virtually every new environmental regulation and proposition in the last five years. They involved dry-cleaning chemicals, pharmaceuticals, pesticides, patent law. Virtually all of the new initiatives were targeted and most of them never saw the light of day.”

At press time, opposition to the TPP was steadily gaining momentum.

The auto industry, for example, fears a further loss of manufacturing jobs. Dairy farmers are concerned the deal could open up the market to American milk and related products, affecting their ability to stay afloat.

Many of the jobs that could be moved out of Canada under the TPP would likely head to countries with little or no protection for workers and poverty-level wages, further entrenching the inequalities among countries in the TPP. In Mexico, for example, under NAFTA, millions of people were displaced from farming after being forced to compete with agricultural business in the U.S.

And then, there’s the potential impact on global pharmaceuticals.

Doctors without Borders say the TPP could dismantle public health safeguards that are enshrined in international law and restrict “access to price-lowering generic medicines for millions of people.”

The Canadian Centre for Policy Alternative’s Scott Sinclair and Stewart Trew echo these concerns: “The intellectual property chapter of the TPP could prove a minefield for efforts to control drug costs in Canada, which are already the second highest in the world.”

With the full text released in November 2015, the deal still needs to be ratified by all of the countries involved.

Canada is under huge international pressure to sign the TPP without changes. U.S. President Barak Obama is preparing to take it to Congress for ratification and others are preparing to sign.

Calls to reject the TPP continue to grow from unions, environmental organizations, and other civil society groups. Prime Minister Justin Trudeau has promised an open public debate on the agreement.