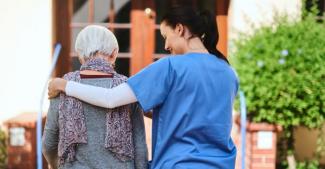 Premier John Horgan says a re-elected NDP government will continue to top up wages for seniors’ care workers even after the COVID-19 pandemic is over.

The Hospital Employees’ Union says the move will provide stability and certainty for seniors and workers in a sector where there are wide gaps in wages and benefits from one care home to another, a result of legislation and policies enacted by the former BC Liberal government starting in 2002.

The commitment was part of a package of proposals on seniors’ care that also include greater oversight of spending of public funds by private care home operators, and a plan to build more care homes in the public non-profit sector.

The Premier says that details of the proposals will be contained in the BC NDP’s platform, to be released later in the campaign.

HEU’s acting secretary-business manager Mike Old says the COVID-19 pandemic has focused public attention on a long-term care system that has been fragmented and weakened by waves of privatization and contracting out under the previous BC Liberal government.

“As the pandemic hit, wages for care aides and other staff varied by as much as $7 an hour from one care home to another – a situation that could have resulted in serious staffing shortages as public health officials limited workers to single sites to prevent COVID-19 transmission.

“The government took swift action to top up wages and forestall an even greater crisis. Now they are moving to provide a level playing field for seniors and workers, which will help stabilize working and caring conditions over the long term and protect those critical care relationships.”

HEU has called for the re-establishment of a common wage and benefit standard in long-term care for years including in submissions to the all-party Select Standing Committee on Finance and Government Services.

In their 2019, 2021 and 2022 pre-budget consultation reports, the Select Standing Committee acknowledged the impact of wage gaps in the sector and recommended moving to a common wage standard to ensure stable quality care.

In his announcement today, the Premier also committed to introducing more stringent accountability measures to ensure that private care home operators deliver the care they are funded to provide.

“Earlier this year, B.C.’s seniors advocate reported that for-profit operators under-delivered on funded care by more than 200,000 hours a year. These stronger accountability measures are badly needed to protect quality care for our seniors,” says Old.

“And the plan to build more public non-profit care homes will reverse the trend established by the former BC Liberal government to overwhelmingly rely on for-profit chains for new capacity. The advocate has also reported that non-profit operators are providing more care than they’re funded to provide. That’s more care for our seniors.”