[Victoria, B.C.] Today, health care workers employed in housekeeping and food services rallied for a fair contract and better health care for a second day in a row, this time at Royal Jubilee Hospital in B.C.s capital city. 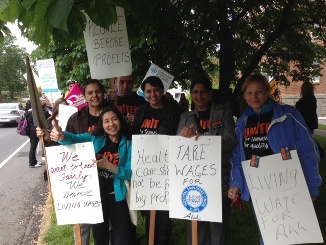 According to HEU secretary-business manager Bonnie Pearson, these HEU members continue to struggle under low wages and unacceptable working conditions. Moreover, many have been without a contract for more than eight months.

“Since privatized hospital cleaning and dietary services were introduced a decade ago, hundreds of millions of dollars have gone into the coffers of multinational corporations who have profited from low wages and reduced service levels for patients,” says Pearson.

HEU represents over 4,400 members who work as housekeepers and food services workers employed by Acciona, Aramark, Compass, Marquise and Sodexo. Most have not seen a wage increase for almost 20 months and compensation is falling behind their counterparts in unionized hotels.

“At Vancouver Island hospitals, our members working for Compass and Acciona are on the front line fighting infection and disease,” says HEU member and Compass housekeeper Ryan Mann. “But the wages needed to support our members and their families is now estimated to be $18.73 per hour for each parent working full-time in Greater Victoria. These corporations pay much less than that.”

“Retaining an experienced, well-trained workforce is critical to maintaining patient health and safety,” says Pearson. “But low wages and difficult working conditions contribute to high staff turnover and less experience on the floor.”

According to a 2012 survey of nearly 1,000 HEU members in this sector, seven out of ten say they have had to speak to a manager about workload concerns. Over one-third were injured on the job in the last two years.

This is the second of two rallies that HEU housekeeping and food services members held this week. Over two hundred HEU members rallied on Vancouver General Hospital's front steps on Tuesday, May 28 to bring attention to their fight for a fair deal and better health care.

Bargaining resumes between HEU and most of the companies in May and June.