HEU laundry workers deliver petition to the legislature, urging government to save jobs

VICTORIA – The voices of 12,423 British Columbians were heard at the provincial legislature this morning with the tabling of a petition calling on government to halt the Interior Health Authority’s plan to privatize hospital laundry services in 11 communities.

A delegation of Hospital Employees’ Union laundry workers presented their petition to NDP MLAs Michelle Mungall, Jennifer Rice and opposition health critic Judy Darcy on the steps of the legislature, prior to being tabled during Question Period.

Contracting out hospital laundry would result in the loss of 175 family-supporting jobs and the vital public health service possibly removed altogether from those communities. The IHA has announced that the private contract bidders are located in the Lower Mainland and Alberta. 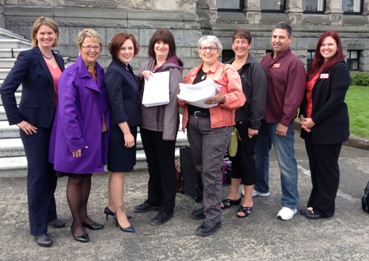 Along with growing public support, city councils in Nelson, Kamloops and Vernon have passed motions to protect jobs and hospital laundry in their communities. Councils in other impacted cities have also spoken out against the IHA’s privatization plans.

HEU secretary-business manager Jennifer Whiteside is calling on the IHA to reconsider its privatization scheme and make the estimated $10 million investment over 10 years to upgrade and replace any of the aging equipment.

“Even Interior Health officials have repeatedly stated that our laundry workers are doing an excellent job and that the current in-house service is run efficiently,” says Whiteside. “We believe Interior communities are worth the investment.”

Last fall, the IHA announced that it would explore the privatization of hospital laundry at five major hospitals in Kelowna, Vernon, Kamloops, Penticton and Nelson, along with services in six smaller communities.

IHA invited a short list of vendors to bid on the work in February and is expected to make a decision later this summer.