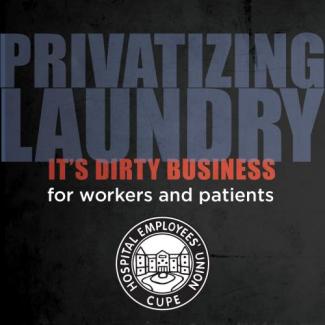 Today, 29 laundry workers at Kelowna General Hospital will work their final shift, after the Interior Health Authority (IHA) contracted out their jobs and awarded a 20-year contract worth an estimated $266 million to private corporation Ecotex Linen Services Inc.

IHA’s March 2016 decision to follow through with its plan to privatize hospital laundry services in five major regions – and lay off more than 100 workers – came after an extensive union-led fightback campaign, which garnered enormous public support.

Nearly 13,000 British Columbians signed a petition – tabled in the legislature – and several city and district councils passed motions to protect jobs and services in their communities.

Although hospital laundry services in the principle sites – Kelowna, Kamloops, Nelson, Penticton and Vernon – are being privatized along with supporting jobs in Cranbrook and Trail, the services in six smaller communities will remain in-house. They are Golden, Ashcroft, Princeton, 100 Mile House, Lillooet and Williams Lake.

And the health authority itself publicly declared the HEU workers were running a quality, efficient service. It cited the capital costs to upgrade or replace equipment over the next 10-25 years as the reason behind this privatization scheme.

At the time of their layoffs, most HEU laundry workers were earning an hourly wage between $18.68 (Laundry Worker I) and $21.26 (Laundry Worker IV). Ecotex is advertising a starting wage of $11.50 an hour for hospital laundry jobs.

“The privatization policies of the BC Liberals continue to wreak havoc on families, communities and public services,” says HEU secretary-business manager Jennifer Whiteside. “And the sooner we can turn the page on these failed policies, the better.”

In addition to the Kelowna layoffs, 17 laundry workers in Vernon were laid off on June 1. Another 13 positions at Penticton Regional Hospital, 18 at Royal Inland in Kamloops, and 22 in Nelson, Trail and Cranbrook are on the chopping block in the coming weeks.

After bumping, retraining and posting into new positions, 34 workers will still be unemployed.