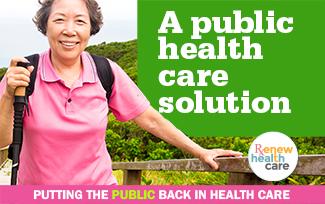 The announcement was made by B.C. premier John Horgan and health minister Adrian Dix today in Vancouver and is the first component of a four-part surgical strategy.

The new centres are based in part on the successful Richmond Hip and Knee Reconstruction Project which reduced median wait times for hip and knee replacement by 75 per cent. Despite its success, the project was abandoned by the previous government.

HEU secretary-business manager Jennifer Whiteside says that for more than a decade, health policy experts, medicare advocates, front-line health practitioners and health unions have pointed to the Richmond model as a positive public solution that should have been scaled up across the province.

“The evidence-based solutions to our health care challenges are there, but the political will to implement them has been in short supply,” says Whiteside.

Dix recently announced that he was launching an evidence-based research strategy within the health ministry and providing more funding for the Therapeutics Initiative which looks at the effectiveness of medications and provides education to health care providers.

Under the surgical plan announced today, the government will fund 4000 additional hip and knee surgeries by the end of March 2019, 34 per cent more than the previous year.