VANCOUVER – The Hospital Employees’ Union is joining with other health care advocates at rallies at the offices of six B.C. Conservative MPs today, as part of a national day of action highlighting major reductions in federal health care transfers. 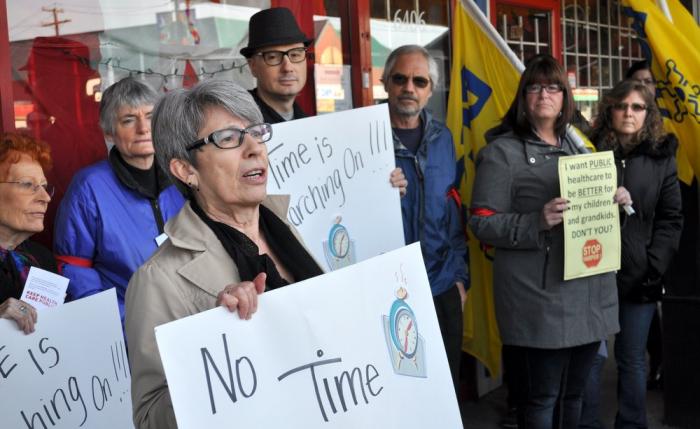 “On March 31, the ten-year-old national Health Accord expires and when it does billions of dollars in federal medicare funding will be lost,” said HEU secretary-business manager Bonnie Pearson at a morning rally in front of Vancouver South Conservative MP Wai Young’s office.

“For B.C., beginning in April, over a quarter billion dollars will be slashed from federal health care transfers to our province over the next twelve months.”

For the past decade, the Health Accord set the level of health care funding that Ottawa provided provinces and territories annually. However, in late 2011, a newly-minted majority Conservative government in Ottawa unilaterally announced it was not renewing the accord.

“Over the next ten years, B.C. is projected to lose nearly $5 billion in funding from Ottawa for health care, making our province the confederation’s biggest loser per capita when the current accord expires,” said Pearson.

In addition to Vancouver, rallies were held in Richmond, Surrey, Kelowna, Kamloops and Campbell River. The rallies were supported by HEU and other health care advocates including the BC Health Coalition and several local community organizations.

“These extreme cuts will only continue to undermine our already struggling public health care system here in B.C.,” said Pearson.

“Given the economic challenges facing B.C., Premier Clark should be leading the charge against the end of the Health Accord,” added Pearson. “After all, when her government was re-elected nearly a year ago, the Premier promised to balance the budget, while also committing to not making cuts to health care.

“These will be difficult promises for the Premier to keep, if Ottawa carries through with these devastating reductions to health care transfers.”