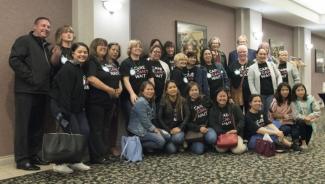 The Hospital Employees' Union (HEU) is calling on B.C.’s Minister of Health and the Fraser Health Authority to stop the mass staff layoffs at two long-term care homes in Coquitlam.

About 150 staff were told they would lose their jobs at the privately-owned, publicly-funded Lakeshore and Madison care centres, leaving nearly 200 seniors without their familiar and trusted caregivers.

The facilities’ owner is switching or “flipping” subcontractors, resulting in the layoff of care aides, LPNs, activity workers, housekeepers and food service workers.

In early May, over 100 staff at Madison and Lakeshore care homes in Coquitlam voted to join the Hospital Employees’ Union. Three weeks later, they received layoff notices.

In addition, 50 housekeeping and dietary workers who were in the middle of an organizing drive at the same facilities were also laid off.

“In the midst of a province-wide seniors’ care staffing crisis we have a situation where the owner of the two facilities is choosing to fire all of the staff instead of keeping them on despite the change of contractor,” says HEU secretary-business manager Jennifer Whiteside.

“The reality is, workers at these two facilities exercised their right to join a union – and now they are without jobs,” says Whiteside. “This is union busting at the most basic level, and it’s hurting vulnerable seniors who depend on their familiar care staff.”

Whiteside says the province has a widely-acknowledged recruitment and retention problem in seniors’ care due in part to rampant contracting out and contract flipping in the sector – practices that destabilize care, keep wages low and create precarious work.

“We are asking the Minister of Health and the Fraser Health Authority, who fund contracts with these facilities to ensure staff retain their employment without loss of compensation, hours of work or their union.”

Large-scale staff turnover due to contracting out and contract flipping has been endemic in the long-term care sector. Legislation facilitating these practices was brought in by the former BC Liberal government over the past 16 years.

Whiteside says it’s time for the BCNDP to honour its campaign promise to “support relationship-based care, and ensure those care relationships are not disrupted by contracting out or contract flipping.”