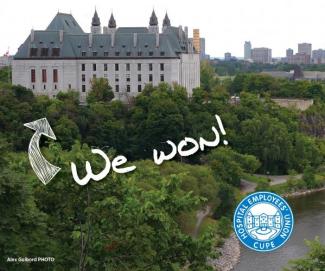 The Supreme Court of Canada has found that two Health Sciences Association of BC (HSA) members and a Hospital Employees’ Union (HEU) member who contracted breast cancer while working in the laboratory at Mission Memorial Hospital are entitled to workers’ compensation coverage. Their employer, Fraser Health Authority, fought their claims for more than a decade.

HSA president Val Avery welcomed the decision, and thanked the workers for their perseverance.

“Beginning almost 15 years ago, these union members embarked on a campaign for compensation because they were sick. Today, they are responsible for setting an important precedent for all workers,” she said.

Lead counsel on the case, HSA’s Tonie Beharrell, said the Supreme Court of Canada has recognized the authority of the Workers’ Compensation Appeal Tribunal (WCAT) to make decisions about causation of disease to a less stringent standard than scientific proof.

“If there is evidence that occupational factors are an element in workers’ health, a tribunal is able to consider all of the evidence before it, including circumstantial evidence, and, in this case, approve workers’ compensation coverage,” Beharrell said.

“This is a significant victory for women and men on health care’s front lines who in the course of caring for others, become ill because of workplace hazards,” says HEU secretary-business manager Jennifer Whiteside.

In  rendering its decision, the Supreme Court of Canada said, “While the record on which that decision was based did not include confirmatory expert evidence, the Tribunal nonetheless relied upon other evidence which, viewed reasonably, was capable of supporting its finding of a causal link between the workers’ breast cancers and workplace conditions.”

At issue was the role and authority of administrative tribunals like the WCAT, which have specialized expertise in their particular area, and whether the courts ought to be able to dismiss that expertise and reweigh the evidence that was before the Tribunal.

As explained in the unions’ submission:

“... the scientists and physicians were weighing the evidence against the standard required to reach “scientific conclusions” based on “scientific evidence.” That is a significantly higher test than that required in the administration of the workers’ compensation scheme for the adjudication of workplace disease claims, and in fact requiring the Appellants to meet that test would fundamentally undermine the purpose of that scheme.”

Their claims to WorkSafeBC for compensation for breast cancer as an occupational disease were initially denied in each case, but the B.C. Workers’ Compensation Appeal Tribunal (WCAT) reconsidered the decisions, and allowed the claims.

WCAT reviewed all of the evidence before it, including expert reports that did not rule out occupational factors as a contributor to the cancer. It found that it was “sufficient to conclude it was as likely as not that some workplace exposure was of causative significance.”