HEU convention kicks off with dancing, tears and solidarity messages 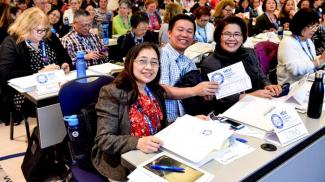 More than 650 delegates gathered from across the province yesterday to launch HEU’s 31st biennial convention at the Hyatt Regency Hotel in Vancouver.

While the New Delegates Forum and reception anchored Sunday’s events, the main convention plenary kicked off on Monday with First Nations greetings by Rebecca Duncan, and a rousing dance-fest performance by Vancouver-based hip-hop artist Ndidi Cascade.

But the highlight of the day was an emotional farewell speech from HEU’s financial secretary Donisa Bernardo, who is retiring after 20 years on the Provincial Executive, including 12 years in her current position.

In her moving and inspiring keynote address, Bernardo encouraged delegates to step up into leadership roles and take full advantage of the many educational opportunities available to HEU members.

And she told delegates the union is in a strong financial position moving forward.

Recalling her early days of trade unionism, Bernardo said, “I quickly learned that activism matters – and it all starts by finding your voice, and then using it. When we join our voices together, we can make positive social and political changes – ones that benefit our workplaces, our communities, our families, and ourselves. United – as a collective – we are stronger.”

Bernardo also spoke about the changes she has seen over the last two decades around equity, diversity and inclusion. 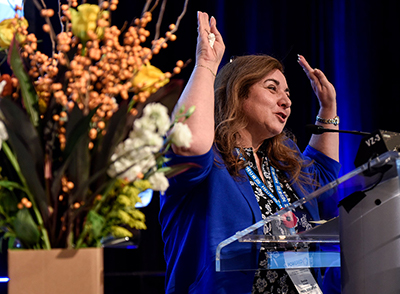 “If we want to be a more inclusive union, it’s critical for us to continue to listen, learn and grow to move equity forward. And in order for this important work on equity and diversity to continue, some of us need to step aside to create space for others.

“During my career and years of activism, I’ve encouraged numerous members to get active in their union, our union. I’ve mentored countless members, and I hope those same members now have the confidence and tools to mentor others. Let’s pay it forward.”

Bernardo referenced her own background as a child who emigrated from Italy and had to learn English when she started elementary school.

“I know many of our HEU members are immigrants, or they represent an equity-seeking group, or they have felt disenfranchised at some point in their lives. I am proof – standing here before you – that if I can climb the ranks to become an elected leader, so can you. Because you matter!”

“HEU was one of the unions who fought hardest against the attacks of the Liberal government and suffered the most because of government’s attacks on working people,” said von Sychowski. “British Columbia is a progressive province. Our values resonate with working people, both union and non-union, because they are working-class values.”

CUPE National president Mark Hancock praised HEU for its successful track record in fighting back against anti-labour governments and creating positive changes in the labour movement.

He also acknowledged the union’s commitment to political lobbying to improve the lives of British Columbians.

Citing Proportional Representation as an example, Hancock said, “This actually might be the most important ballot any of us ever cast. Because whether you care about health care, or workers’ rights, or education, or the environment, all of that depends on the governments we elect. And our current voting system has been failing us for some time.”

In her final address to HEU delegates before retiring, B.C. Federation of Labour president Irene Lanzinger discussed activism, health and safety, the importance of unionized workforces, and standing up to governments.

“You have been such a strong union representing an amazing and diverse group of members, and representing them so well – often in the face of great adversity [Bills 29 and 94].

“In the face of that adversity, you were tenacious and persistent. HEU’s voice was loud and clear and you were heard. Your actions in those difficult times will have a dramatic and lasting impact on workers and unions in this province. Thank you for that.” 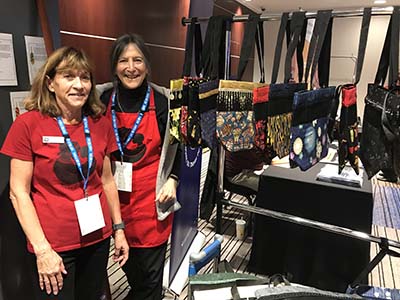 Convention 2018 opened Sunday with our Solidarity Fair, bringing together labour groups, coalitions, and global and local social justice organizations to share the amazing work they do.

There were display tables, information booths, prizes and games.

Shown here are volunteers from the Greater Van GoGos grandmothers’ campaign, which fundraises and works in solidarity with women in Africa by making and selling handmade totes, purses and tea cozies.

Find out more at greatervangogos.org.