HEU convention wraps up on a high note 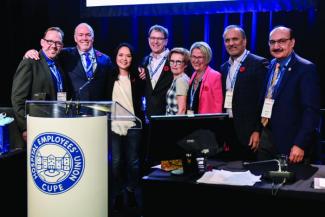 Referring to yesterday’s introduction of legislation to repeal Bill 29 and Bill 94, Horgan said, “After 16 years, we have an opportunity to set things right. And by God, we’re going to do that… When we stick together, we can do extraordinary things.”

Horgan praised HEU for its tenacity in battling Gordon Campbell’s anti-worker laws all the way to the Supreme Court of Canada, and paid tribute to the critical role HEU members play in delivering quality health care to British Columbians.

“We are so proud and honoured to stand with you today,” said Horgan. “You have been a symbol to all of us of perseverance, dedication and resolute determination to protect the rights that have been fought for, for generations.”

The premier also explained how a system of Proportional Representation could have prevented some of the damage caused by the BC Liberals in 2002. He said the opposition would have had a stronger voice with 17 seats in the legislature instead of two – former MLAs Joy MacPhail and Jenny Kwan.

And the crowd leapt to its feet to give an extended standing ovation to MacPhail and Kwan (MP-Vancouver East) when they made their way through more than 660 appreciative delegates to the stage.

“We could not have done what we did for those years without the help of the labour movement,” said MacPhail. “And HEU was there every step of the way.”

“It’s an emotional day for all of us today,” added Kwan. “It’s a dream come true. I never thought this day would come… Your rights matter because all of our rights matter.”

As the premier made his way back through the crowd, he and the other 18 MLAs in attendance generously posed for “selfies” with numerous HEU delegates.

And the award goes to…

Recently retired Joyce Beddow (Ashcroft local) received the Mary LaPlante Sisterhood Award for her years of activism in the union and in her community. She was especially recognized for her volunteer work cooking for seniors, supporting the Food Bank, and helping her community during the Interior fires and floods. She is currently on the Interior Health Authority Board. 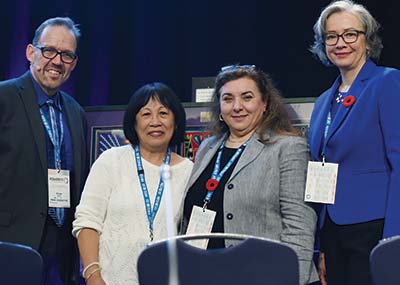 Cora Mojica (Seven Shining Stars local, Vancouver General Hospital) received the HEU Social Justice Award, as a founding member of the Living Wage Campaign and for her leadership during every round of Sodexo bargaining.

And Christine Edgecombe (CMHA Fraser local) was recognized with the HEU disAbility Rights Award for her advocacy work, particularly for people with invisible disabilities, including chronic pain and mental health.

An HEU plaque was also awarded to the Madison and Lakeshore local for unionizing, then pushing back against their employer for flipping contracts – twice – and laying off workers. The more than 100 HEU members successfully rallied with residents and their families to save their jobs and protect their rights.

And plaques were awarded to Shorncliffe Care Centre and Totem Lodge in Sechelt for their long campaign to protect the jobs of about 200 HEU members, when the only publicly run long-term care homes on the Sunshine Coast were being closed to build a private facility.

CUPE BC president Paul Faoro brought greetings on behalf of his 92,000 members. “Powered by Solidarity is such a great theme for your convention,” he said. “And really, solidarity is much more than a theme, it’s the guiding principle of the labour movement.

On behalf of the more than 140 HEU staff members working in the union’s five regional offices across the province, PEA-HESU president Jackie Paquette told delegates, “The staff of HEU are proud to have been here with you this week to celebrate this momentous win with you. An attack on you is an attack on us. When you fight, we fight alongside you. And your wins are our wins. We work side by side powered by solidarity, and we thank all of you for the work you do each and every day.”

In other convention business, debate continued from the previous afternoon on two remaining equity resolutions, which were passed by delegates. Outstanding resolutions were referred to the incoming Provincial Executive.

As delegates entered into the final stretch, they adopted a number of constitutional amendments to modernize the union’s Constitution and By-Laws.