HEU First Nations members stand together for fairness and respect

Over the two-day gathering, members passed resolutions (including language on job security and OH&S), and spoke openly about their cultures and communities, their workplace challenges and their experiences as union members. 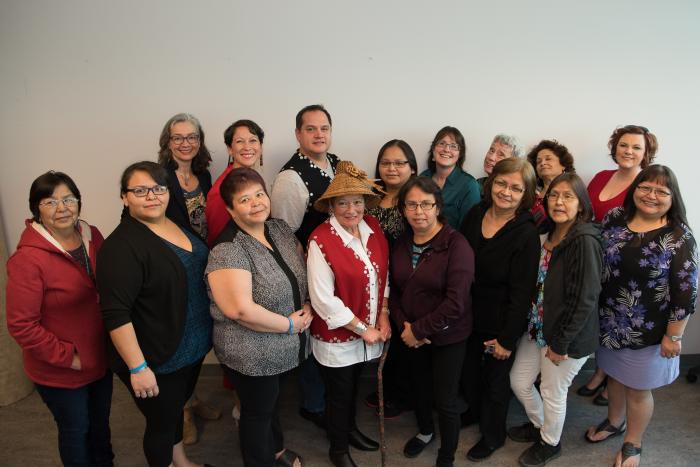 During thought-provoking and sometimes emotional conversations, participants shared their knowledge and stories with HEU representatives and leadership to help the union gain a better understanding about First Nations culture and where members see themselves within their union.

They made several recommendations, including the need for HEU to create “safe spaces” at meetings and educational workshops so that all members feel included and heard, and also suggested that any dialogue should be based on the principle of “speaking with” one another rather than “speaking to” someone.

Delegates also discussed how the union can be more culturally responsive in the process of collective bargaining and in the kind of language used in their collective agreements to better serve members in contract interpretation and enforcement.

“If you don’t hear from us, it doesn’t mean we’re okay,” said Nadine Jones, a Maternal and Child Health Family Visitor at Xaaynangaa Naay (House of Life) Health Centre in Haida Gwaii. “We’re not contacting the union because we’re lost,” adding that the lack of Aboriginal language in their contract makes it difficult to defend members’ rights when they’re not clearly outlined.

By painting a vivid picture about life in their communities, members talked about colonialism, oppression and segregation, and highlighted the need to remove hierarchies in order to move forward and build strong, healthy relationships that are based on familiarity, understanding, respect and trust.

Members spoke about the value of language in their oral culture and how words hold significant meaning. For example, a conference agenda item called “powerful and powerless” was changed to “strengths and weaknesses”, and another that involved give and take was changed to sharing “because it’s more reciprocal and we’re all equal. ‘Give and get’ is linear,” said Sue Gladstone, a substance abuse counselor at Xaaynangaa Naay (Skidegate local).

Delegates also explained that First Nations have a holistic way of thinking, and described why their traditional laws should always be included in contract negotiations.

“We are the keepers of the earth,” said Lydia Stephens, a community wellness counselor at the Nisga’a Health Care local. “We have to think circular. We have to think holistically. We watch where we tread. We don’t walk with heavy feet. I think it’s in our DNA. It’s not linear… Just like right now, we’re walking this path together [at this conference]. We’re on this journey together.” 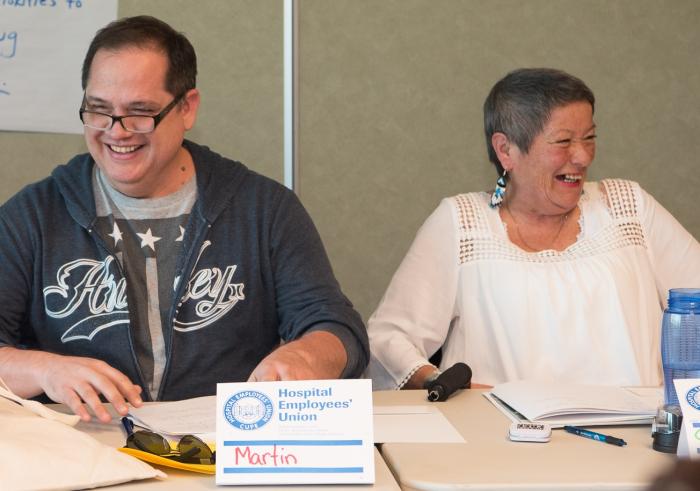 During her opening address, Whiteside gave a brief history of First Nations members in HEU, acknowledged the challenges in accessing health care services in remote communities, and remarked on some of the barriers – including family responsibilities – that’s preventing some First Nations members from becoming more active in the union.

“As trade union activists, you all know that our collective agreements are only effective if we enforce the contract language that we’ve negotiated together,” said Whiteside. “And that can be extra challenging for our members living in small communities, where sometimes your employers are your family members.

“We need to educate band councils, the leaders and local communities on what role the union plays to improve working and caring conditions. And also raise awareness about what role you play as health care workers and activists.

“And we need to provide ongoing education to the HEU membership about First Nations culture and the challenges you face at your work sites, so that we can continue to build solidarity and unity in this diverse union of ours.”

Whiteside spoke in depth about the union’s role in advocating for First Nations health care workers. “Fundamentally, it’s about recognizing that all workers have the right to decent wages, benefits and working conditions. And that coming together to collectively organize and bargain for those rights is the best way to defend and build on those rights… and to build solidarity within HEU.

“Unions are a pathway not only to better working conditions, but they are also a pathway to healthier communities. Unions fight poverty. We fight discrimination. We fight for Medicare.

“We also have another set of very important responsibilities regarding First Nations members in HEU. We can’t ignore the history of colonization in our province and in our country. As a union, as a social justice organization, we must recognize this legacy and we must act to support justice and reconciliation for Aboriginal people.”

HEU has represented First Nations members since Nisga’a and Gitxsan certified in 1997, but it’s been an ongoing battle to keep unions in First Nations communities. A groundbreaking Federal Court of Appeal victory – led by HEU – in 1999 made it legal for unions to organize and certify First Nations workers.

But some First Nations members say they’re still harassed and threatened by employers for their union activism, which carries far beyond their workplaces and into their communities.

“There is an ongoing push to decertify unions after each [band council] election,” said one delegate. “They make our work and home lives difficult by spreading false rumours about us just because we support being in a union. I don’t think people realize the sacrifices that [First Nations] union activists make.”

Stronger walking side by side 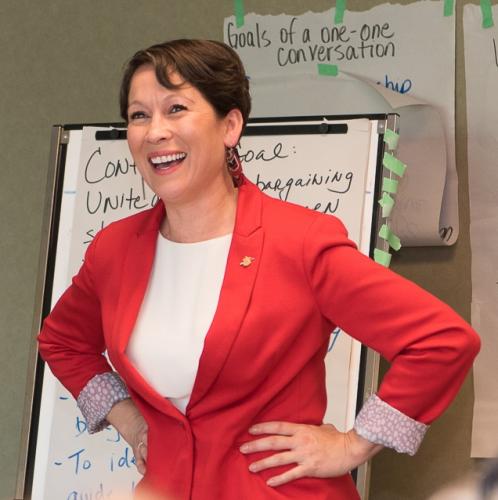 Delegates were inspired by special guest speaker, BC NDP MLA Melanie Mark, who is the first First Nations woman elected to the provincial legislature. Bringing solidarity greetings, Mark thanked members for their courage to stand up for their rights and encouraged them to “push the envelope and not take no for an answer.”

After a brief personal history, Mark described what it’s like to make political history and how she’s navigating her way around the learning curve that comes with being in the public spotlight as well as the etiquette required in the legislature.

“I said, ‘the days of cowboys and Indians are over,’ which did get some heckles, but they are. We have rights now that dictate how our society should be treated – whether you’re a woman or First Nations.”

Mark concluded by saying she’s proud to be a representative voice for First Nations. “You feel stronger when someone walks beside you. I’ve been standing up to bullies my whole life, and I deal with hatred and bigotry by fighting back with facts.”

That sense of unity was echoed throughout the conference when delegates acknowledged that by standing strong together, they can be empowered as one.

“You’re not strong by yourself,” said personal care aide Ingrid Seymour of the Stz’uminus Health Unit. “You have to have other people with you.”

Canadian lawyer Shannon Bentley, who specializes in Aboriginal law, gave a fascinating talk on interest-based collective bargaining and dispute resolution. “It’s about building relationships that went off the rails. It’s not adversarial because that has proven not to work.” 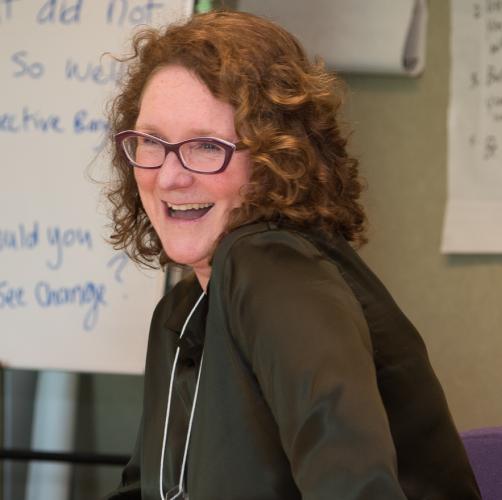 ntley gave examples of bargaining tables where they broke from the conventional approach of the employer on one side of the table and the union on the other with one spokesperson each. Instead, they incorporated traditional laws, invited an Elder to join the process, and focused on relationship-building through familiarity, understanding and trust.

The bargaining teams sat in a circle where everyone could freely speak, including guests, and they brainstormed as a group to determine what their issues and core interests were. When talks would turn adversarial, “the Elder would tell us a story to remind us what our common interests were and get us back on track.”

Bentley also addressed the pushback against unions from many Aboriginal leaders. “Unions are considered outsiders,” said Bentley, “[which is] another form of colonialism. The leaders are trying to protect what they have and rebuild what’s been taken before, such as their land, so they resist unions. But this is an opportunity for a partnership, where the union can bring their skills, knowledge and expertise to the community. The union has a lot to offer and can play a helpful role.”

In her closing remarks, Bernardo delivered a solidarity message and thanked members for their commitment to providing quality health care in their communities.

“I want to assure you that as we move forward in bargaining, you will have the full support of your union behind you,” said Bernardo. “That’s 46,000 union sisters and brothers who will back you up in your fight for fair contracts. We will make sure the resources are there to support you. And we will also continue to provide you with opportunities to deepen your skills as activists within HEU.”

Bernardo also encouraged members to get involved in next year’s provincial election to help stop the BC Liberals’ anti-union, pro-privatization agenda.

“If we stand united, we can make a difference and change the political climate in this province. Just look at last fall’s federal election. It’s a clear reminder that what we do – as activists – really does matter when it comes to making political change.”