Since 2005, HEU’s Pink Triangle Standing Committee has recognized the International Day Against Homophobia – May 17 – as part of its member and community outreach. May 17 is an opportunity for us to draw attention to the harmful impact of homophobia, and to recognize our Lesbian, Gay, Bisexual, Transgender, Transsexual, Intersex (LGBTTI) sisters and brothers in our workplaces.

The theme of this year’s campaign is Mental Health and Well Being.

While sexual and gender diversities are still characterized by many people worldwide as a mental health issue, the awareness campaign aims to eradicate myths about LGBTTI people which lay at the heart of public persecution, discrimination and social stigma. 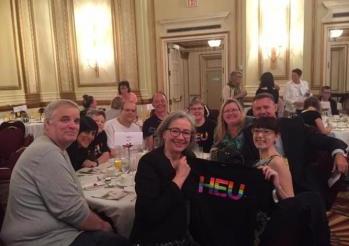 social justice union, HEU’s been a pioneer in advocating for LGBTTI rights, same-sex spousal benefits, and employment equality – even negotiating anti-discrimination language in our collective agreements.

At HEU’s 1994 convention, four equity caucuses were established, including the Lesbian and Gay Men Standing Committee (now the Pink Triangle Standing Committee) to recognize the diversity of our membership, advance and protect the rights of equity-seeking workers, and advocate against discrimination based on gender, race, ethnic background, disability or sexual orientation.

This year’s theme was LGBTQ Families. Emmy Award-winning news anchor Kevin Newman and his son Alex shared their story of struggle, connection and forgiveness after Alex came out as gay – at a QMUNITY youth drop-in.

Transgender minors should be allowed to change their sex, Quebec private member's bill proposes (CBC, May 12, 2016)

Other useful May 17 links: