Members get ready for bargaining in support service sector 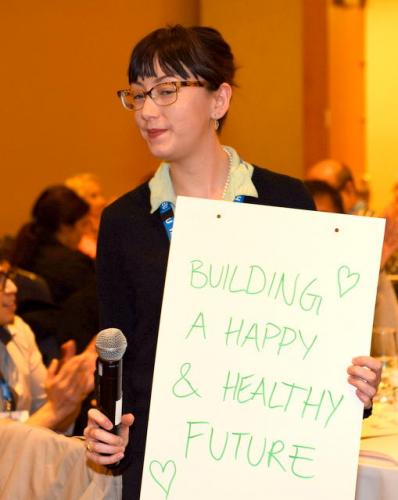 Bargaining in this sector is expected to get underway later this year for 15 collective agreements covering over 4,000 members. These workers are employed by four multinationals – Acciona, Aramark, Compass-Marquise and Sodexo – at 80 sites that include acute care hospitals and long-term care facilities throughout the Lower Mainland and southern Vancouver Island.

In preparation for negotiations, members reviewed the 14-year history of this sector, before moving on to developing 12 bargaining priorities that touched on job security, fair compensation and building power in the workplace.

“Staying united together in HEU has been the key to members’ success in the past, and it will be in the future,” said HEU secretary-business manager Jennifer Whiteside in her remarks to delegates that set the framework for bargaining.

“Between 2005 and today, we’ve gone through three major rounds of bargaining with these employers and moved wages from $10 an hour to $16 an hour on average, while improving benefits and workplace rights,” added Whiteside. “And while we have not yet reached a living wage – we have closed the gap significantly.”

Whiteside also addressed the impact of a new light-duty rate that Compass imposed on its employees when it took over the housekeeping service from Aramark in Vancouver Coastal Health and Providence Health in 2015.

“We need to level the economic playing field that the four companies operate in, so no one company gets a competitive advantage in bidding for housekeeping and dietary contracts – and the light-duty cleaning rate is where we must start.”

“That means, HEU is going to make it a priority to get rid of two-tier wages and put Compass’ light-duty rate in the ditch,” said Whiteside to the cheering members in the conference hall.

Local leaders drawn from the sector also gave presentations on a variety of issues – from what it means to serve on a bargaining committee, to how 800-plus members fought to keep HEU as their union last year after the Compass contract flip.

Conference-goers also heard from guest speakers including the BC NDP’s labour critic Shane Simpson and health critic Judy Darcy who outlined their party’s vision for a more fair and equitable British Columbia.

“Members were heartened to hear that a BC NDP government would bring greater stability to their workplaces by extending meaningful successorship to cover this part of the health care sector,” said HEU president Victor Elkins who emceed the Monday evening proceedings. “We need labour laws that ensure workers can retain their jobs and their union, when contracts are flipped between private companies.”

HEU financial secretary Donisa Bernardo says members in this sector have taken a lead role over the last dozen years fighting for workers’ rights. “From the Sodexo strike of 2005 to the living wage campaign, and more, you have shown that you are a force to be reckoned with.”

Delegates also participated in hands-on small group workshops, plenary activities, and an evening social that together provided opportunities to enhance members’ understanding of the sector, improved their skills as activists and added to their experience of solidarity in the union.

The conference was also attended by the union’s Provincial Executive.