Employers cannot contract out to avoid bargaining with a union
Newsletter

A B.C. arbitrator has found Park Place Seniors Living guilty of committing an unfair labour practice when it decided to contract out the entire workforce at New Horizons Care Centre in Campbell River, in 2014.

At the time, Park Place’s Senior Vice President of Operations issued statements to staff, residents, family members and the public attributing the decision to contract out to labour costs and staff’s decision to unionize.

As a result, more than 100 HEU members lost their jobs, their union representation and their right to bargain a renewal collective agreement. Many were then rehired by the new contractor – CareCorp – at significantly lower wages. 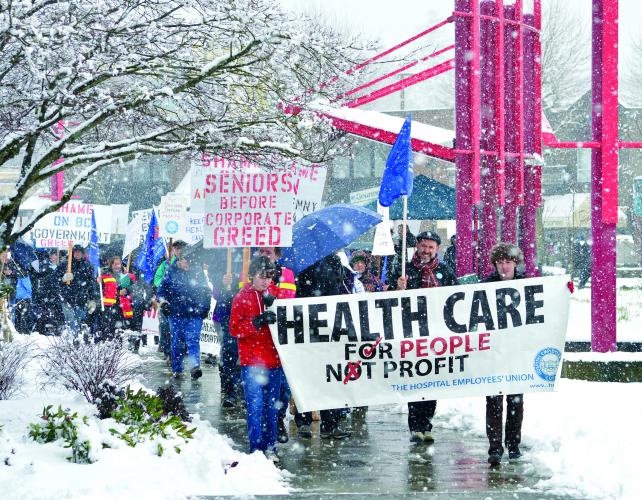 The workers subsequently rejoined the union and continue to be represented by HEU.

When attempts to discuss alternatives to contracting out with Park Place failed, the union initiated a policy grievance. HEU alleged that Park Place had violated the collective agreement and had committed an unfair labour practice by using contracting out to punish staff for unionizing and to avoid bargaining with the union.

On June 8, HEU learned its grievance was successful on both points.

In addition, Park Place refused to provide the union with specific financial information to justify the decision to contract out or explain to HEU bargainers what the employer needed to keep the work in house.

Arbitrator Holden also found that the decision to contract out was in part motivated by “anti-union animus.”

Based on statements to the public it was clear that Park Place had decided to contract out in order to avoid negotiating a renewed collective agreement with HEU.

“The comments appear to be an attempt to discredit and undermine the Hospital Employees’ Union and the employees who chose to be represented by the Union,” stated the arbitrator, who held it was a clear violation of the Labour Relations Code.

In the wake of the decision, HEU will be working to find an effective remedy for these violations at New Horizons.  The arbitrator has retained jurisdiction to determine a remedy if the parties are unable to negotiate a resolution.

“This is a significant victory,” says HEU secretary-business manager Jennifer Whiteside. “It sends a strong message to employers that they cannot contract out the work of a bargaining unit in order to avoid bargaining with a union.”

Whiteside says it is not enough to allege cost concerns without sharing specific financial information with the union and discussing alternatives to contracting out with an open mind.

HEU has a similar policy grievance against Park Place arising from their contracting out at Sunridge Place starting on June 21.

HEU will again be arguing that, although some of the circumstances are different, like New Horizons, Park Place contracted out in order to avoid bargaining with HEU.