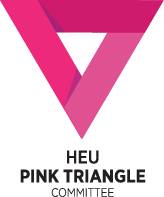 The committee works to improve and enhance awareness of lesbian, gay, bisexual, transgender, two-spirited, intersex, queer and questioning members of our union. It provides a networking support system to guarantee HEU members have a safe and harassment-free workplace.

In 1992, HEU sponsored participants to attend OUTRights, a conference on gays and lesbians and the law. This marked the beginning of gay and lesbian visibility within HEU.

The following year, the union’s Provincial Executive funded a Lesbian and Gay Focus Group at the HEU Summer School in an effort to eliminate homophobia and address oppression.

*LGBTQ+ is recognized as short-form for those who self-identify as lesbian, gay, bisexual, transgender, two-spirited, intersex, queer or questioning.