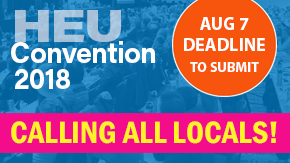 Critical deadlines are just days away for HEU’s 31st biennial convention – Powered by solidarity – to be held at Vancouver’s Hyatt Regency Hotel (November 4 – 9).

During convention, delegates will debate and vote on proposed resolutions and constitutional amendments. They’ll also be electing a new Provincial Executive.

To become a delegate, members must be elected at a general, or special, local membership meeting with quorum, and have attended at least 50 per cent of the regular local meetings held in the previous 12-month period.

Delegate credential forms must be signed by the local chairperson and secretary-treasurer, or if necessary, by another local officer(s) present during the delegate elections, or a local designate.

Proposed constitutional amendments and resolutions must be adopted by the majority of members at a local membership meeting, with quorum, and must be signed by the local chairperson and secretary-treasurer.

Be sure to mail or courier the original green delegate credential forms, proposed resolutions and constitutional amendments, and hotel accommodation forms to the HEU Provincial Office by Tuesday, August 7 at 5:00 p.m. A $50 registration fee per delegate will be deducted from local rebates.

Convention rules about deadlines, local representation, constitutional amendments and resolutions etc. are covered by HEU’s Constitution and By-Laws, Article 5. Rules around delegate eligibility and running for Provincial Executive positions can be found in Article 4 and Article 6 (respectively).

Delegates who wish to run for the Provincial Executive may submit a biography (with information on their union experience) with a 200-word statement and a photo by completing our online webform by Tuesday, August 7 at 5:00 p.m.

Late submissions will not be accepted.