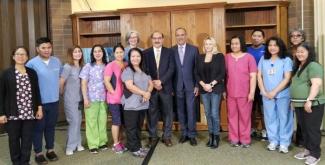 As we’re wrapping up HEU’s 75th year, I’ve been reflecting on the hard work that union members do every single day – seen and unseen – to advocate for patients and residents, to ensure that workers’ rights are respected and to make workplaces safer. This is important work, and all your efforts are much appreciated.

I’d say it’s been a pretty good year for HEU, with many accomplishments big and small. Here are five things we achieved as a union in 2019 that are definitely worth celebrating.

1.    Union of choice for health care

HEU continues to be the union of choice in health care welcoming more than 1,300 newly organized members in 2019. Our union now represents more than 50,000 members in 290 active locals. A big thank you to those courageous workers who have helped bring the benefits of union membership to their co-workers.

Last month, I joined Health Minister Adrian Dix to announce plans for a new occupational health and safety organization focused on health care workers. It’s an initiative we led in the last round of facilities subsector bargaining and which includes all health bargaining associations plus the Doctors of BC.

The new agency will tackle the high rates of injuries in the health care sector, and promote best practices to make health care work safer. The provincial government will provide $8.5 million over three years to support this work.

In April, I was invited by Labour Minister Harry Bains to help announce major changes to the Labour Relations Code, including stronger successor rights that protect health care workers’ jobs, collective agreements, and union membership in the face of contract-flipping.

This is a huge win for health care workers and the public – one that will bring stability and continuity to the delivery of health care services.

In health care, the practice of contract-flipping has resulted in entire teams being fired from nursing homes and in hospital support services – sometimes repeatedly. Before the changes to the law this year, workers would often suffer wage and benefit rollbacks and lose their union, if they were rehired by a new contractor.

Those changes apply across the health care sector with the formal repeal of Bill 29 and Bill 94 on July 1 of this year. Those B.C. Liberal-era laws excluded health care workers from successorship protections.

4.    Better access to WCB benefits for those suffering mental trauma

Another important change this past spring makes it easier for care aides and other community health workers, and nurses to have their workers’ compensation claims accepted for work-related mental disorders.

The extension of the mental disorder presumption recognizes that these workers are at higher risk of violence and other trauma in the workplace that could contribute to a mental disorder, such as post-traumatic stress disorder (PTSD) or other illnesses.

Our members – care aides, community health workers and nurses – face extraordinarily high risks for violence and other traumatic events that can lead to PTSD and other mental disorders.

In January, HEU members ratified a new three-year facilities contract that introduced paid leave for those experiencing sexual or domestic violence, compassionate leave for pregnancy loss, stronger bullying and harassment protection, and the restoration of our pre-2002 “no contracting out” language.

The new contract also addresses workload with the addition of 600,000 new bargaining unit hours by 2021, a one million dollar fund for MSI prevention, and $8.5 million in funding for our new health and safety organization.

We’ve also established a process to look at “repatriating” contracted out work, for eliminating grid steps at the lower end of the pay scale, and much more.

I’m looking forward to all we will accomplish in 2020, and on behalf of the Provincial Executive, I wish you a safe and peaceful holiday season.