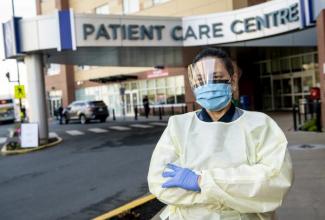 A re-elected NDP government will end the practice of contracting out hospital cleaning and food services to multinational corporations and bring these workers back under the control of public health authorities, according to the party’s election platform released today by Premier Horgan.

Privatization and contracting out of these critical services by the BC Liberal government between 2002 and 2005 resulted in the firing of thousands of hospital support workers – a group that is mostly women and highly racialized. Overnight, wages were cut in half and pensions and other benefits were slashed.

And despite subsequent re-unionization and several rounds of bargaining, privatized support workers in some of B.C.’s largest hospitals still earn less today than during the SARS epidemic 17 years ago.

The Hospital Employees’ Union’s acting secretary-business manager Mike Old says the NDP’s commitment to reunite the health care team acknowledges and respects a group of workers often undervalued, but critical to the health and well-being of patients, the public and fellow workers.

“The Premier and his party have committed to addressing an injustice that consigned a whole generation of health care workers to margins of the workforce with low wages and difficult working conditions,” says Old.

“Bringing the team back together will result in better coordinated care and support, more accountability, and quality jobs that will attract and retain skilled and experienced workers.”

In 2002, the former BC Liberal government passed legislation that tore up health care collective agreements and cleared the way for massive privatization of health services and the largest mass firing of women workers in post-war Canadian history.

Certain provisions of that law (Bill 29 – the Health and Social Services Delivery Improvement Act) were later struck down by the Supreme Court of Canada in 2007, and the rest repealed by a unanimous vote of the legislature in 2018.

HEU represents more the 50,000 health care and community social services workers in the public and private sectors and in a variety of care settings.