An arbitrator has ruled that a Parksville nurse was unjustly disciplined by her employer for speaking out on the state of seniors’ care at a public meeting last year.

The operators of Stanford Place suspended Tina Irvine for six shifts without pay after she spoke out at a January 2012 public forum co-sponsored by the Hospital Employees’ Union and the Oceanside Coalition for Strong Communities.

Irvine’s observations at the forum about the impact of wage cuts on staff morale and resident care were reported in a local newspaper, and she was suspended shortly afterward. 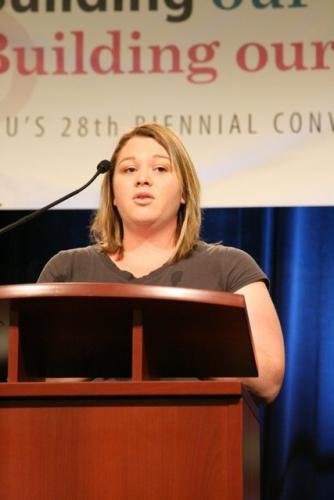 At the time, Irvine served as secretary-treasurer for the HEU local at Stanford Place where she is employed as a licensed practical nurse.

“Despite employer intimidation, our members will continue to speak out on behalf of their residents and patients,” says Pearson. “I know that Tina and her co-workers appreciate the support they received from the local community through this incident.”

In his decision, arbitrator Christopher Sullivan upheld a union grievance that Irvine was unjustly disciplined and ordered Stanford Place to pay her the wages for the period of her suspension.

Sullivan wrote in his September 10, 2013 decision:
“The facts surrounding the incident in question support a conclusion that the grievor’s statements did not exceed the limits of propriety, and were within the range of fair comment. The substance of her speech captured her own experiences at the workplace and her observations of the impact of significant wage and benefit cutbacks on staff morale, turnover, and the provision of services. Suffice it to observe all the grievor’s statements had reasonable foundation.”