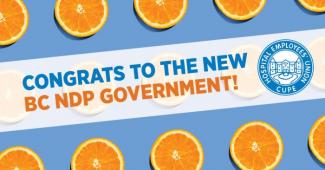 The Hospital Employees’ Union is extending its congratulations to the BC NDP and Premier-Elect John Horgan for the strong mandate they’ve received from B.C. voters this past Saturday.

In a campaign that was strongly focused on health care, the BC NDP appears to have won 55 seats in the 87 seat legislature, pending the count of mail-in ballots expected next month.

The BC NDP made a number of important commitments in the campaign including bringing contracted out hospital housekeeping and dietary workers back under the direct employment of health authorities, continuing to level up the pay of workers in long-term care and assisted living facilities post-pandemic, and re-establishing a provincial standard for wages, benefits and working conditions in this sector.

“For sixteen years, the BC Liberals neglected and mismanaged health care and it was a disaster for HEU members and the public,” says HEU’s acting secretary-business manager Mike Old. “With a majority mandate, John Horgan and the NDP government can continue to rebuild health care and ensure that our COVID-19 recovery protects workers, families and communities. “And HEU will be working hard to ensure that commitments made on the campaign trail are translated into concrete improvements on the front lines of our health care system.”

Among those projected to have been elected is HEU secretary-business manager Jennifer Whiteside who took a leave from her position to run in her riding of New Westminster.

“We’re very proud of all Jennifer has accomplished at HEU on behalf of working people, as an advocate for equity and social justice, and most recently, for her work to protect seniors and workers during this pandemic,” says Old. “She will be a fierce advocate for her constituents in New Westminster and beyond.”

HEU is the BC Health Services Division of the Canadian Union of Public Employees’, and a number of CUPE members and staff from B.C. also ran for election.

Lisa Beare and Rachna Singh were re-elected in their Maple Ridge-Mission and Surrey-Green Timbers ridings respectively, while Dan Coulter is currently poised for a breakthrough win in Chilliwack.