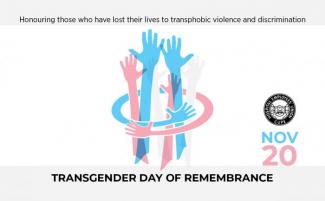 On November 28, 1998, Rita Hester, a transgender African American woman, was murdered in Massachusetts, two days before her 35th birthday. It was a brutal hate crime.

That’s why activists join together on November 20 – Transgender Day of Remembrance (TDOR) – to raise awareness about the issue of violence against transgender and gender non-conforming people, and to remember those attacked or killed for expressing their gender identity.

According to B.C.’s Ministry of Health website, about 46,000 British Columbians identify as trans or gender diverse, but few will access gender-affirming surgeries or medical services.

The day was first recognized in 1999 by transgender advocate Gwendolyn Ann Smith, who founded TDOR in response to Hester’s death.

“The Transgender Day of Remembrance seeks to highlight the losses we face due to anti-transgender bigotry and violence,” wrote Smith in a statement on GLAAD’s website. “With so many seeking to erase transgender people – sometimes in the most brutal ways possible – it is vitally important that those we lose are remembered, and that we continue to fight for justice.”

In the U.S., the Human Rights Campaign (HRC) reported 26 violence-related deaths of transgender people in 2018. And so far in 2019, there have been 18. But advocates say those numbers don’t account for the many unreported hate crimes and murders.

Canadians have seen improved rights for transgender and gender diverse people, on both federal and provincial levels, including the ability to change the gender displayed on passports, citizenship papers, driver’s licenses and birth certificates, and improvements to medical coverage for some gender reassignment surgical procedures.

In November 2018, B.C.’s health minister announced an “x” designation for government identification documents for those who do not identify as either male or female. And the province became the first in Western Canada to provide publicly funded gender-affirming lower surgeries so transgender people no longer have to travel out of province or country for surgery.

For more information and resources, visit Trans Lifeline  or Trans Care BC .