International Day for the Elimination of Racial Discrimination – March 21 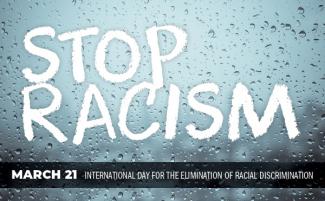 On March 21, 1960, an atrocity sparked outrage around the world. Sixty-nine peaceful Black demonstrators were murdered by South African police. Out of this tragedy, the International Day for the Elimination of Racial Discrimination was forged, in hope that racism and division could be overcome.

Yet almost 60 years later, we approach this day shocked and grieving for the 50 lives just taken – and many more injured --  during last Friday’s attack on Muslims worshipping in two mosques in New Zealand.

HEU joins the Canadian labour movement in condemning this massacre, and standing in solidarity with all communities under attack.

On March 21 we stand with all those – here, and around the world – who are confronting the forces of hatred and discrimination by challenging racism, Islamophobia, bigotry, xenophobia, and anti-immigrant attitudes.

In Canada there are 300 known active white supremacist organizations, and hate crimes are on the rise.

Recent data released by Statistics Canada shows that police-reported hate crimes in Canada rose dramatically in 2017, up by 47 per cent over the previous year. Incidents targeting the Muslim community rose by 151 per cent. Hate crimes targeting Jewish people rose by 63 per cent, and those targeting Black people rose by 50 per cent.

Racism exists in many forms from overt to coded. It’s in actions and attitudes, name-calling and jokes, in person and online. It excludes people from housing, employment, opportunities or activities because of a person’s race or where they come from.

But racism is learned, and it can be unlearned. Hope can be found in our struggle against it.

HEU continues to work against racism and discrimination in all of its forms through our equity standing committees, specifically the Ethnic Diversity committee which has worked over the years to bring greater awareness to the harm that racism causes.

And more recently, the union reaffirmed its mandate to build a more equitable union at HEU’s 2018 biennial convention when members adopted measures to explore how to transform HEU’s structure to be more reflective of its diverse membership.

The Diversity, Equity and Inclusion statement adopted at the convention conveys the interconnection between workers’ rights and equality. “We understand that equity and inclusion are intrinsically linked,” says that statement, “and that an injury to one is an injury to all.”

As a progressive union dedicated to social justice and advancing labour and human rights on a local and global level, HEU supports organizations working to break barriers and eliminate discrimination.