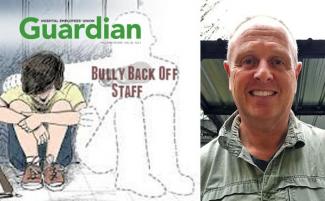 But outside his regular work, he’s on a mission to stop bullying among children and youth.

His interest in innovative ways to address bullying was sparked almost 20 years ago, while counselling a group of youth in East Vancouver.

“The anti-bullying materials they were getting said two things: ignore it, and tell an adult,” says Andrews. “The kids were the ones who asked how realistic this was.”

Ignoring bullying, they said, did nothing to address the victim’s feelings of anxiety and helplessness.

As for reporting the problem, in their experience, adults usually took steps that made the situation worse.

“Schools have policies in place, but they tend to be about separating the kids, monitoring the situation, and punishment,” says Andrews. “That’s often not effective.”

And, he adds, studies show that 50 per cent of kids being bullied will not tell an adult.

His conclusion? Youth need skills and tactics to directly challenge bullying behaviour when it happens. That’s why he created his educational and consultancy organization, Bully Back Off Canada, about 15 years ago.

Andrews offers counselling to kids and parents (both those who are bullied and who bully), and speaks at professional conferences. But primarily, he provides workshops through schools, at the request of educators or parent groups.

As Andrews moves toward retirement, he says, passing on these skills feels even more important. “I want to train the professionals to do the work I do.”

He says, “I was bullied terribly at school. I was a loner and an outcast, and school was absolutely miserable.” Andrews never thought bullying would become the focus of his work, but once he began, he felt a true connection, and now considers it a calling.

Andrews pursues outdoor activities and yoga to stay healthy, and he doesn’t struggle with burnout. “I don’t find it exhausting at all. The rewards are fantastic.”

Read more about Steve Andrews’ approach on his website.