Judy Darcy on the issues 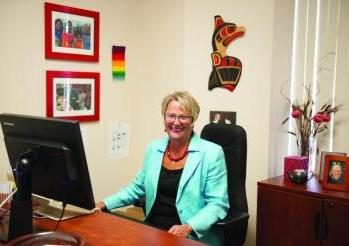 You’ve been in the legislature for almost four years. What are the biggest concerns you hear about our public health care system?

People are in touch with me constantly about waiting for care. Whether that’s waiting a year or two for a hip or knee replacement, waiting for MRIs or CAT scans, or seniors waiting to get into residential care or subsidized assisted living. I also hear from people who have been lying on stretchers in hospital hallways for two weeks – and longer!

What dignity do you have when you’re 80 or 85 years old in a hospital hallway?  But people are forced to wait because the appropriate beds and services and staffing just aren’t there.

After more than a decade of privatizing health services, what are the main problems impacting patients and workers?

We’re seeing a drastic reshaping of our public health care system. And if the Liberals get another term in power, I can’t begin to imagine how much more damage they will inflict.

I’ve mentioned wait lists. Instead of investing in innovation that will strengthen the capacity of the public system -- and reduce wait lists -- this government is contracting out tens of thousands of procedures to private clinics.

I worry that contracting out all of those surgeries and diagnostic procedures to private clinics weakens our capacity in the public system and puts us at the whim of those private clinics in the future.

And now the provincial government is considering allowing three-day hospital stays in private clinics. That’s unheard of in Canada! I’ve pressed the health minister on this repeatedly in the last few months, and he is refusing to rule it out.

Secondly, I need to mention MSP.

It is completely unfair that we have MSP premiums – let’s call it what it is, a health care tax - where if you make $40 000 a year you pay the same as someone who makes $400 000 a year. We’re the only province in Canada that has a health care tax like this. It’s a big burden for low-income people and seniors and I hear about it from people all the time.

Privatization is also about services that were delisted from MSP shortly after the Liberals were elected. People now have to pay out of pocket for physiotherapy, massage therapy, eye exams, foot care and many other services. If you can’t afford to pay, you’re out of luck.

Third, the cost of prescription drugs is having a huge impact on people.

This is so wrong. And it could be so different. We need a provincial government that will step up and advocate for a national pharmacare plan.

And I need to mention seniors care. On top of privatizing food and housekeeping services, almost all of the new seniors’ care facilities that have been built are private, for-profit businesses.

And in one care home after another, we’ve seen the impact of contracting-out and contract-flipping that tears apart the close bonds with familiar caregivers and destabilizes care.

There’s a huge toll on the workers who dedicate their lives to care for these seniors... and seniors’ well-being suffers both physically and psychologically.

Brian Day’s legal challenge to our public health care system starts in September. The B.C. government will be arguing in defense of medicare. What more can it do to curb the expansion of private clinics?

For the sake of public health care in BC, I sincerely hope that the government does it’s job in defending medicare against Brian Day. But I really worry about their commitment when I see their record of privatization.

I wrote to Health Minister Terry Lake recently and asked him to conduct a thorough audit of the Copeman Healthcare Clinics in B.C.

The government of Alberta is doing a forensic investigation of the two Copeman clinics there because it’s been alleged that the clinics were ordering a whole battery of tests for patients whether they needed them or not – and billing the public system as well as billing private insurance plans.

According to reports, the clinics in Alberta say this directive came from the head office of the Copeman clinic in Vancouver.

I asked the health minister to investigate if these practices are happening here, and he’s refused to do so. He says there is no evidence from their past audits that there are any illegal practices. And yet, according to Freedom of Information requests filed by the BC Health Coalition, the government only did a cursory examination when they conducted their audits.

I hope for the sake of our public medicare system that the provincial government mounts a vigorous defense against Day’s clinics. We all need to keep pressing them to do so.

Is there a success story from your years as the NDP’s Health Spokesperson that you are particularly proud of?

Shortly after I was elected in 2013, a group of childhood cancer survivors and their parents came to meet with me.

When they were treated with aggressive chemotherapy and radiation that saved their lives, medical science didn’t understand that, for children, these treatments can result in horrific “late effects” - like secondary cancers, excruciating pain, post-traumatic stress, cognitive issues, and menopause in their 20’s.

The group was trying to get the attention of government and the health care system, but nobody was listening to them. So they asked me to be their advocate.

We campaigned for a year telling their stories across the province, in the media and in the legislature.

Finally, the minister announced that the government would create a specialized clinic for the survivors of childhood cancer. This clinic would be one place where people could go and be treated by health care providers who understand what’s happening to them.

It was a long struggle. But it showed the power of a community organizing together with their elected representatives. And it will make a big difference in their lives.

This article first appeared in the Summer/Fall 2016 issue of the Guardian.