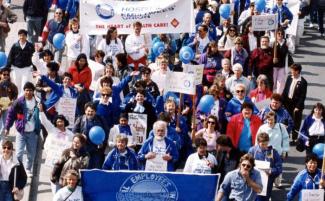 When the women’s and men’s unions at Vancouver General Hospital joined forces in 1944 to form the Hospital Employees’ Federal Union-Local 180, they had no way of knowing how their struggles would shape a movement and influence the future of health care in British Columbia.

A decade-long depression, the final stages of World War II, and anti-union sentiment had all created a formidable challenge to their early organizing efforts.

But organize they did, despite intense employer intimidation.

At the time of certification, HEU represented 390 employees. And within a decade, the union grew from one VGH local to 19 locals across the province.

Throughout the late 40s and early 50s, the union not only boosted wages by 400 per cent since the 1930s, they also pioneered pension and superannuation schemes, accumulative sick leave, holiday allowances, and secured a plan for employer-paid medical coverage.

True to labour’s motto – “What we desire for ourselves, we wish for all” – HEU’s founding leaders also lobbied governments to provide health insurance to all citizens. And at its first biennial convention in 1958, delegates voted for calls to ban nuclear weapons and support South Africa’s anti-apartheid movement.

These are our roots. They run deep. And they are strong.

They nurtured a union that would fight tooth and nail for its members and for public health care, organize the unorganized, and take on issues of social justice when they emerged.

Over the decades, HEU grew in numbers and strength to become the oldest, largest health care union in B.C. It took on the daunting task of organizing workers in private nursing homes, scored big wins on pay equity and job security, and organized a large number of community social services workers in the 1990s.

Amid great strides forward and severe setbacks, the union developed a reputation for standing up to hostile governments and remaining resolute, even when our right to free collective bargaining was under attack by the Gordon Campbell Liberal government’s anti-worker legislation (Bill 29) in the early 2000s.

Determined to fight the Campbell government on all fronts, HEU scored a huge victory in 2007 when the country’s highest court ruled key provisions of Bill 29 had violated members’ constitutional rights. And for the first time, that ruling established collective bargaining as a charter-protected right for all Canadian workers.

Last year, B.C.’s NDP government kept a long-standing promise to repeal Bill 29 and Bill 94, ending one of the union’s longest and most challenging struggles. And it opened up the potential for the repatriation of contracted services.

As we celebrate our 75th anniversary, we have a lot to be proud of. We inherited a profound sense of fairness and sheer determination from those who founded HEU in 1944. Today, we are more than 50,000 members strong.

And most importantly, we are a union of workers who care, who truly are the heart of health care.