The 46,000-member Hospital Employees’ Union today announced its support for Irene Lanzinger in her bid to become the first woman to lead the B.C. Federation of Labour as its president.

HEU secretary-business manager Bonnie Pearson says Lanzinger has the credentials, commitment and vision needed to preserve and enhance the BC Fed’s reputation as the voice for working families. 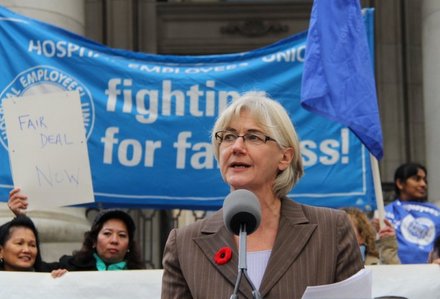 “Irene is an experienced leader who will successfully articulate labour’s vision—on the shop floor, to government and through the media,” says Pearson.

Victor Elkins, HEU’s president, says Lanzinger represents a reinvigorated labour movement that advocates for union members’ interests, and shows solidarity and support for workers who are struggling for the most basic rights.

“As the BC Fed’s secretary-treasurer, Irene is part of a leadership team that has made the BC Fed more relevant to young workers, marginalized workers and unorganized workers,” says Elkins.

“Because of that, we are a stronger labour movement. That’s why Lanzinger should be at the helm of the BC Fed going forward,” says Elkins.

HEU’s financial secretary, Donisa Bernardo, says that Lanzinger has been a strong ally to HEU members and understands the value of public services and the perils of privatization.

“As the former leader of the teachers’ union, Irene knows from a workers’ perspective why strong public services – like education and health care – make our society stronger and more equitable,” says Bernardo.

The union represents workers who provide direct care and support in hospitals, care homes, First Nations health services and in the community. HEU members work for public, non-profit and for-profit employers in every corner of the province.

Delegates representing unions affiliated to the BC Fed will elect a new president at its convention next month in Vancouver.