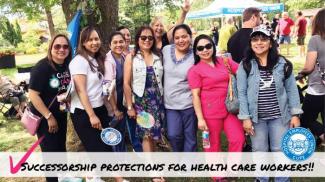 B.C.’s labour minister Harry Bains today introduced a number of changes to the province’s Labour Relations Code including collective agreement protection for health care workers and others impacted by the re-tendering – or “flipping” – of service contracts.

HEU secretary-business manager Jennifer Whiteside welcomed the changes, saying they will improve health care delivery in a sector where direct care and support services have been undermined by privatization and contracting out over the last 17 years.

“In hospitals and care homes, the lack of successor rights has made the work more precarious, lowered wages, and contributed to a growing recruitment and retention crisis as workers seek more secure and better paid work elsewhere.

“In nursing homes, this practice has undermined care for vulnerable seniors who depend on continuity in their care relationships.

The amendments to the Code include an expanded definition of successor rights that provide job security and protect health care workers’ collectively bargained wages, benefits and working conditions in cases where contracted service companies are changed as a result of contract retendering.

The Code currently limits successorship to the sale or transfer of a business.

In health care, the practice of contract-flipping has resulted in entire care teams being fired from nursing homes. Workers may be invited to reapply for the same job with a new contractor but usually at a lower rate of pay, and with the loss of their union and any benefits related to the length of their service. In some cases, workers have been subject to multiple contract flips.

The workers impacted by contract-flipping in health care are highly racialized and overwhelmingly female.

The three-member expert panel appointed by the labour minister last year to review the Code unanimously recommended the change and noted in their report that:

“It is evident that contract re-tendering has caused a significant erosion of earnings, benefits and job security. This has resulted in employment precarity with negative impacts on long-term and seniors’ care. The Panel was advised on one senior’s facility that changed contractors six times. This disruption of services and continuity has profound implications for patient and seniors’ care and their families.”

Today’s legislation amending the Code also includes a number of provisions that will make it easier for workers to exercise their constitutional right to join a union, and to achieve first collective agreements.

Last November, Health Minister Adrian Dix introduced legislation repealing laws from 2002 and 2003 that excluded health care workers from successorship provisions of the Code. That law was adopted unanimously by all parties.

The HEU represents more than 50,000 health care workers across B.C. in a wide range of occupations and in a variety of hospital, long-term care and community-based settings.