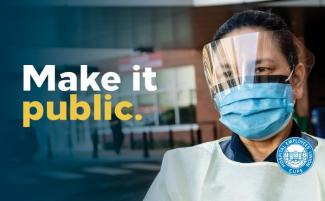 HEU’s campaign to bring thousands of contracted out housekeeping and dietary staff reached a new benchmark this month with nearly 6,000 letters sent to provincial legislators calling for an end to 20 years of privatization.

With collective agreement negotiations ramping up for more than 4,500 members employed by corporate contractors, the union has been calling on the BC NDP government to act now on its 2020 election commitment to transition this workforce back to B.C.’s public health authorities.

The contracting out of housekeeping and dietary services in many of B.C.’s most populous regions has pushed women and workers of colour to the margins of the health care workforce with inferior benefits, little retirement security and wages that are lower today than during the SARS epidemic in 2003.

In 2018, the BC NDP repealed Bill 29 – the law brought in by the previous BC Liberal government to clear the way for the privatization of support services. And in 2019, HEU negotiated provisions in the 2019 – 2022 Facilities Collective Agreement to help transition these workers to direct employment by B.C.’s public health employers.

Under the terms of those provisions, the union finalized a Labour Adjustment Transition Agreement with the Health Employers Association of B.C. earlier this month that provides a roadmap for a smooth transition once a decision has been made by government.

Housekeeping and dietary staff play a key role in ensuring good care and a safe caring environment in our hospitals and care homes – and they have faced enormous risk during this pandemic, with COVID-19 infection numbers exceeding all other allied health occupations with the exception of care aides and nurses.

“We have a commitment to bring justice to these workers, and a plan for a smooth transiton,” says HEU’s interim secretary-business manager Mike Old. “All we need now is a decision by government to act on their promise to reunite the health care team.”

HEU members and the public can send a letter to their MLA supporting the union’s campaign by visiting MakeItPublic.ca. It only takes a few minutes.