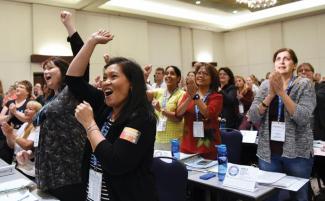 The legislative session was broadcast from Victoria to HEU’s convention through a live feed that allowed delegates to witness the historic moment that members had fought for over the past 16 years.

Bill 29 was rammed through the legislature without notice one weekend in January 2002, and resulted in the largest mass firing of women workers in Canada since the Second World War.

“You did it,” exclaimed HEU secretary-business manager Jennifer Whiteside. “It took 16 long years, but you did it. The solidarity within this union inspired solidarity across the labour movement.”

In a room filled with emotion, delegates lined up at the mics to tell their firsthand experiences stemming from the legislation and its devastating impact on themselves and co-workers.

“Fragmentation of health care delivery, the disruption of care relationships, and more precarious and lower paid work is the direct result of these mean-spirited laws,” said Whiteside. “Repealing these laws is a giant step towards restoring justice and fairness for health care workers and repairing the damage that’s been done to health care delivery.”

The Vancouver Coastal Health Authority had announced plans to restructure the hospital, replacing Heiltsuk care aides with LPNs brought in from other communities or health agencies. 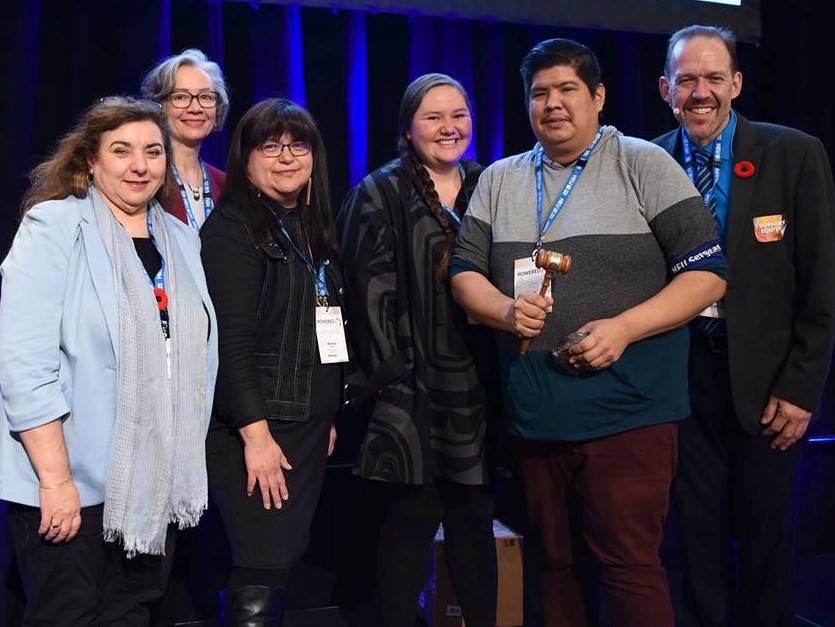 “We needed to preserve their livelihoods, and our access to traditional health care practices and culturally competent care,” added Brown.

“It took a lot of collaboration with HEU, the community, patient care aides, and the Council,” said Slett.

“That’s why we were able to turn it around [with] many months of hard work and persistence. It was very important to us that Heiltsuk care remained in Heiltsuk territory… We all have a responsibility with reconciliation and this is one positive outcome of being able to work together.”

In an era of reconciliation, Brown called out Vancouver Coastal for its lack of consultation. “You don’t get to do that. You don’t make unilateral decisions without consulting the community that you’re serving… It took an army. We all stood in solidarity. We took it from a micro-situation to a macro-situation that they couldn’t ignore.”

The HEU convention gavel was then presented to the Bella Bella local for that successful fightback campaign. Delegate Clark Wilson accepted the gavel on behalf of his local.

“This is awesome,” said Wilson. “I got involved in the union three years ago. I got involved for our local because there was nobody else there to do it. I am thankful to the union and to the Heiltsuk Council for keeping our jobs in our community.”

“What a day,” he told delegates. “I got up this morning and thought it was a normal morning, but then I heard the news. It’s days like this that I wish I was still a labour reporter.”

The focus of his remarks was the extraordinary and unrecognized role of Indigenous peoples in building B.C.’s economy through fishing, hunting, trading, canning and mining. And he pointed out that Indigenous longshoremen were some of B.C.’s earliest unionized workers and labour activists.

Equity was the predominant theme on Thursday afternoon. It began with a presentation by Jennifer Whiteside on the current state of equity, diversity and inclusion within the union.

It was followed by an emotional and passionate debate, where delegates adopted resolutions to support the union’s equity work.

That work will be grounded in HEU’s statement on diversity, equity and inclusion, which was passed unanimously.