Nationwide call for action to end violence against women – December 6 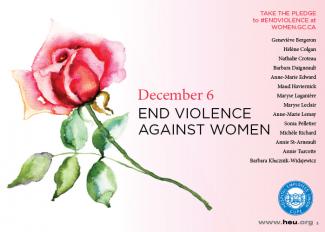 More than 25 year ago, Canadians were devastated by the biggest mass killing of women in our nation’s history. It was December 6, when a lone gunman entered l’École Polytechnique de Montréal, separated the female and male engineering students, and opened fire on the young women, murdering 14 of them and injuring several more.

Why? Because of their gender. Known as the “Montréal Massacre”, the date is now observed as the National Day of Remembrance and Action to End Violence against Women.

Since that tragic day in 1989, women’s groups, human rights activists, Canada’s gun control coalition, community supporters, and the labour movement have lobbied governments to address the issue of violence against women and girls.

Yet every year, the problem and its contributing factors – economic inequality, societal attitudes, inadequate prevention and response – remain.

That’s why the Status of Women Canada is urging Canadians to take the pledge: The 16 Days of Activism against Gender Violence – using the hashtag #EndViolence. Now it the time to both reflect on violence against women and take action to end it. From November 25 to December 10, we urge HEU members to take part in this important social media initiative.

While women and girls are more vulnerable to many forms of violence than men, stats show Indigenous women are even three times more likely to experience violence.

An RCMP investigation revealed there were 1,073 Indigenous women murdered between 1980 and 2015, and 174 remain missing. But since many missing women go unreported, the numbers are most likely higher. And after much public outcry, the federal government finally launched a National Public Inquiry this summer.

On December 6, HEU encourages members to remember those 14 women gunned down in the prime of their lives, and take action to end violence against women and girls. See links below.