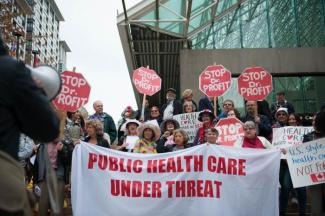 The principles of universal public health care were upheld today in an important decision delivered by the Supreme Court of B.C.

The decision comes as a result of the decade-long legal challenge initiated by Dr. Brian Day, CEO of the for-profit surgical clinic, Cambie Surgery Centre. Day sought to strike down key sections of B.C.’s Medicare Protection Act that ensure that access to necessary medical care is based on need and not on ability to pay.

However, B.C.’s Supreme Court Justice John Steeves rejected the challenge, writing in his decision that the “introduction of […] private healthcare would create a two-tier healthcare system where preferential treatment can be purchased either directly or through private insurance. That would discriminate against the poor and the ill.”

The ruling also noted that introducing a two-tier system of health care would “increase costs overall while reducing the capacity of the public healthcare system.”

“What the COVID-19 pandemic has undeniably shown us is that a strong, publicly accessible health care system is what will best protect all British Columbians, during a health care crisis or any other time,” says Jennifer Whiteside, Secretary-Business Manager of the Hospital Employees’ Union.

“As a union that fights for fairness and justice, we are incredibly pleased with this decision because it provides a solid rebuke against any efforts to privatize our health care system.”

Public health care advocates involved in the case expect that Dr. Day will appeal this decision, and will likely attempt to move to take this case to the Supreme Court of Canada.