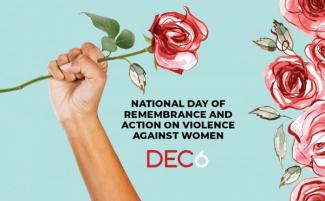 The devastating impact of violence experienced in Canada’s residential schools and the national inquiry into B.C.’s missing and murdered Indigenous women and girls have been in the spotlight in recent years.

That’s why HEU is committed to raising awareness about this critical issue, and is doing our part to help end violence against women. In the new facilities contract, the union successfully negotiated paid leave for women experiencing domestic violence and/or sexual assault.

On December 6, 1989, a lone gunman entered l’École Polytechnique de Montréal, separated the female and male engineering students, and opened fire on the young women, murdering 14 of them. Several more women were injured. Why? Because of their gender.

Known as the Montréal Massacre, the date is commemorated every year in Canada as the National Day of Remembrance and Action to End Violence against Women.

As we mark the 30th anniversary of December 6, the union encourages members to remember those 14 women gunned down in the prime of their lives, and take action to end the violence.